Well, the votes are in and counted; a decision has been made. The people have spoken: global warming is real—magic underpants are not. And bowhunters are not fit to hold higher office, much to the disappointment of Paul Ryan and his role model, Ted Nugent. By shunning the diehard deer hunter, the voters have made it clear that the animals of the Earth are not mere playthings for the rich and famous, the powerful and perverse.

Perhaps now that the election is over we can forget about magic underpants and begin to focus our attention on the real issue that affects all our lives—namely, how human actions are changing the planet’s climate.

According to Kevin Knobloch, with the Union of Concerned Scientists, “President Obama has won another four years in office. In the wake of destruction left by Hurricane Sandy, the country may have experienced its first election disrupted by global warming. What makes this even more troubling is that the urgent crisis of climate change was never meaningfully discussed in the debates or on the campaign trail. After a year of punishing droughts in our nation’s breadbasket, extreme heat across most of the country, and wildfires that devastated our forests and property, it is now time to turn up the heat on our political leaders. Even with the continued polarization in Washington D.C., there is much President Obama can do to adopt science-based solutions that permanently drive down our carbon emissions and more effectively prepare for the climate-related disasters that will continue to threaten our lives and livelihoods.”

The trick will be making sure our lives and livelihoods don’t compound the problems of global warming. For example, shipping freighter-loads of coal across the ocean to be burned in Chinese power plants might provide a few jobs here for some, but is it worth the trade-off of carbon emissions produced?  Is the hedonism of the Western diet worth the continued suffering of billions of animals and the methane they produce? “Real change” will take real commitment and real innovation, rather than business as usual. 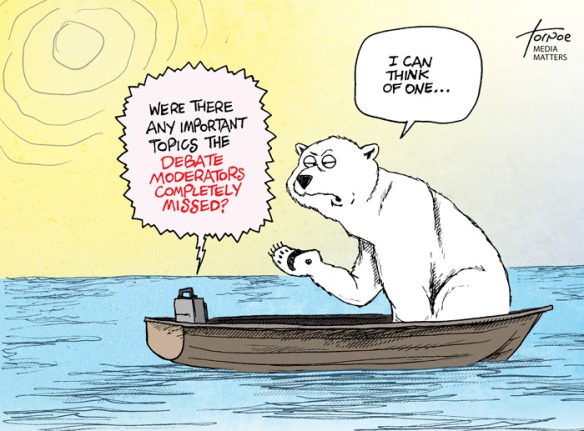 8 thoughts on “The People Have Spoken: Global Warming, Real—Magic Underpants, Not”