Other than a stopover at the Anchorage Airport on my family’s flight home from Japan in 1962 when I was two years old, my first trip to Alaska was in 1977. Back then I was still deceived by society’s prevailing norms and under the influence of its contradicting principles regarding fish (as they were aquatic, enigmatic and incapable of voicing their distress, surely they didn’t have the right to be left alone), so I’d taken a summer job in the salmon fishing industry at a dismal settlement on the windswept side of the breathtaking Alaska Peninsula.

Nak Nek was a gloomy ghost town most of the year and a small but hyperactive boom town during the annual fish-kill frenzy, when the tides twice-daily ushered in barge after barge overflowing with mountains of bloody fish bodies. The only thing the village had going for it, to my mind, was its proximity to the spectacular emptiness of Katmai National Monument, which I vowed to visit once the term of my employment was over. Named after one of its many active volcanoes and supporting a hefty population of grizzly bears who congregate at the spawning streams (to which any salmon lucky enough to escape slow death stuck in a gill net feels a desperate yearn to return), Katmai’s best known feature is Brooks Falls.

At the time, grizzlies (or brown bears, as they’re locally known) outnumbered people, and there wasn’t so much as a footbridge across the clear, deep river that connects Nak Nek Lake to Brooks Lake. This was long before the construction of the now-popular tourist boardwalk and viewing platform, complete with bear-proof railings and gates. The only way through the dense black spruce forest and tall-grass marsh to the falls was on a crooked, narrow bear trail.

On the afternoon of my last day of my stay at Katmai, I decided to cast out a line and try to catch one of the many sockeye salmon converging along the edge of Nak Nek Lake, waiting for their turn to head upstream. Right away I hooked one, but before I could bring it ashore, the line broke and the fish swam off trailing a length of fishing line. I felt terrible, imagining it would end up tangled on something and die unable to get to a spawning bed.

But the next morning, while waiting for the float plane, I tied on a new fly and cast out my line once again. This time I was able to land a fish, which turned out to be sweet relief both for me and for the fish. Incredibly, it was the same fish as the day before—this time the hook was stuck in a branch that had the broken line from the day before tangled around it! I unhooked the fish and released it back into the lake to continue its journey, now unfettered by human garbage…

The experience was part of what led me to eventually turn my back on fishing altogether. The reason I bring all this up is, knowing how bad I felt when the fish got away with a hook stuck in it makes me wonder how some hunters can live with themselves when they wound animals with bullets or arrows and watch them run off to suffer and die a prolonged death because of their thoughtless acts.

Bowhunting is notorious for wounding deer, elk or others who can 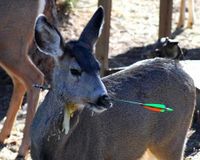 live for months with arrows stuck in them. A recent article about a town on the Oregon Coast deciding to allow bowhunting and hunting with shotguns loaded with slugs, in a forest reserve right outside city limits, quoted a city council member reporting on an all-too-common tragedy, “There are animals that are harvested during rifle season where broadheads are found” (in them). Though he admitted that there’s a higher chance that an elk or deer will be wounded but not killed if hit by an arrow rather than by a slug or a rifle bullet, the bureaucrat did not want to appear softhearted and callously went on to say, “Elk are amazingly tough animals.”

What I want to know is, given that bowhunting has a 50% crippling rate, why aren’t we hearing about more bowhunters turning their backs on the sport? Could it be they lack remorse, guilt, empathy or a normal human conscience?
_______________________

This post includes an excerpt from the book, Exposing the Big Game: Living Targets of a Dying Sport.

19 thoughts on “Crippling Animals Should Weigh on One’s Conscience”