Some folks wonder why I sound like such a misanthropist when I talk about the human species. Although to me the answer appears obvious, I suppose I should explain myself to those who might think of human beings as “superior,” “God’s chosen ones” or in some other way entitled to do as they will to the planet and its non-human inhabitants.

I don’t hold all people to blame equally. I certainly don’t blame you, dedicated reader. You can’t help being born human any more than a wolf, sea lion, salmon or slug has any say over who or what they were born. But there are those who seem to go out of their way to fuel my misanthropy. You see, humans don’t just kill other animals to fill their bellies; they destroy them in droves out of spite, to eliminate the competition…or just for fun.

When I hear hate-speech against wolves from hunters who’d rather have them eradicated again than have to work a little harder to “get their elk;” or come across a starving sea lion on the beach and then read that emaciated sea lion pups are washing up in California by the hundreds–all due to their food being robbed by overly-industrious-yet-completely-terrestrial commercial fishermen who have no business taking anything from the sea; or learn that dolphins are being repeatedly shot to death by people along the Gulf coast I tend to get a bit cynical of the notion that man was created in the image of any kind of benevolent god.

In commenting about the recent rash of dolphin shootings, Randall Lockwood, senior vice president of the Forensic Sciences and Anti-Cruelty Projects department at the American Society for the Prevention of Cruelty to Animals (ASPCA), said, “One of the things that seems to underlie most intentional animal cruelty and acts of abuse is a need for power and control. A lot of severe animal cruelty [comes from an] absence of empathy, and also a sense that [the perpetrators] have a right to do these things.”

Backing up the premise that people act out of an overblown sense of entitlement, Robert Grillo, founder of the group Free From Harm, writes, “Not only do we assert our supremacy over nonhumans, we act upon it at every opportunity. The notion that human interests “trump” animal interests when we create an imaginary conflict of interest is particularly delusional when one considers that we wantonly kill 60 billion land animals and kill another trillion or so aquatic animals every year just to suit our pleasure in eating them, not for any legitimate need to survive.

“In fact, Professor Gary Francione of Rutgers University continually points to the schizophrenic nature of our relationship with animals. Francione simply asks us to look at the big picture: 99% of our animal use is unnecessary and for purposes of pleasure, entertainment, curiosity and education.”

While Nobel laureate Isaac Bashevis Singer wrote, “In relation to animals, all men are Nazis,” perhaps a more appropriate analogy for today’s world would be, “In relation to animals, all humans are serial killers.” How many parents of serial killers have secretly thought to themselves, “I wish Teddy would have never been born?” Considering how well the Earth got by before Homo sapiens came along and started messing with things, and how much mankind resembles a serial killer in its domineering attitude towards animals, I have to say, “Man, I wish you were never born.”

Life on Earth can take a lot of abuse and still come back for more, but it’s never had to withstand more than a few hundred thousand predacious hominids at a time. I don’t find much solace in the prediction by statisticians that the skyrocketing human population “will start to level off when it reaches 10 billion.” TEN BILLION over-consumptive human carnivores devouring everything in their collective path sounds like a monoculture of jabber-mouth two-leggers to me. 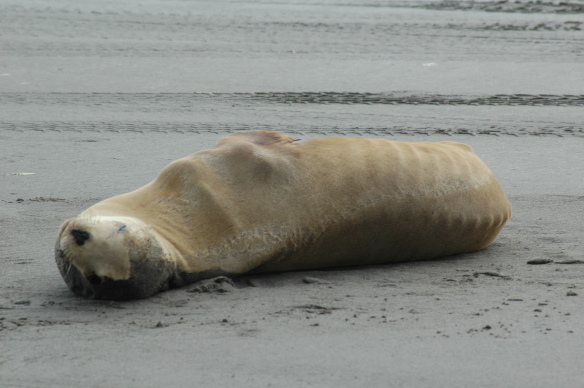 33 thoughts on “Man, I Wish You Were Never Born”