First, here’s a mini guest-rant by a friend from Seattle in reference to the round up and lethal gassing of geese by Wildlife Services (that warped, wretched little wildlife-killing agency formally “Animal Damage Control”) at a nearby lake there:

“Wtf is wrong with people!!?? Will we not be happy until we are the only species on the planet? How dare the geese leave droppings that might be picked up by some diaper-filling toddler [DFT] while visiting the park for one hour. Those beaches should be animal and bug free, and sanitized because for heaven’s sake, kids go there sometimes. Wtf!”

In just a few short, satirical sentences this rant summed up my feelings on the goose situation (and their subsequent extermination) as well as my views on the grandiose, narcissistic and intolerant species responsible for this whole mess. (Note to self: add “goose-stomping Nazi war criminals” to the list of Top 10 New Names for Wildlife “Services.”)

I do have to admit though, whenever I see poop-filled human baby diapers thrown out along the road, discarded on ocean beaches or dumped in the woods at public trailheads, I wish there was some kind of “Service” you could call to round up and do away with the people who stoop to that kind of thing. But we live in a civilized society and don’t treat others so unforgivingly—that is, unless said “other” is a goose.

If people knew geese as personally as I do (I’ve watched them go through their courtship and nest-building routines, seen a gander loyally guarding his mate while she dutifully incubated her eggs, day and night, throughout windstorms and heavy snowfalls during the fickle Montana spring, and witnessed with joy the hatching and rearing of their precious chicks), they would surely think of geese as a species every bit as worthy as their own.

This issue is all the more maddening because it’s a situation humans have brought on themselves (as with so many other wildlife “problems”).

To the casual observer, lakes in western Washington may seem relatively pristine; the water is still so clear and blue it makes you want to dip your cup in and take a long drink. But if you’ve watched the changes over the years, you’d know it’s a habitat that has seen better days.

Not only were the old growth trees that grew to the water’s edge cut down and floated off, the lakeshores themselves were sliced up and sold off as recreation lots or multimillion dollar home sites. Naturally, land owners didn’t want their tiny strip of shoreline to be just a tangle of cedar and spruce trees or shrubs, like salmonberry, thimbleberry or huckleberry, so they tore out the native vegetation, built concrete bulkheads and brought in backfill and lawn grass. Of course they would need a place to tie up their power boat or jet-ski, so pilings were pounded into the sandy shallows where periwinkles and crawdads once thrived, and docks were built, at the expense of any lily pads or riparian vegetation that used to house bullfrogs and provide cover for fish.

The result of all this rampant manipulation is a strange new world, inhospitable for all but the most grass-loving of creatures. And it just so happens that geese, like humans, love mowed lawns. But if there’s one thing in the natural world human beings have a real problem with, it’s a species who dares to do well in the world after people have done their darndest to denude the landscape, claim it all for themselves and instill a sense of “order” that only they can relate to—complete with fences, fire pits and plastic patio furniture with a half-life of roughly 100,000 years.

Disposable diapers and plastic lawn chairs are a lasting scar on the planet. Goose poop, on the other hand, adds fertilizer to the depleted, lifeless soil. 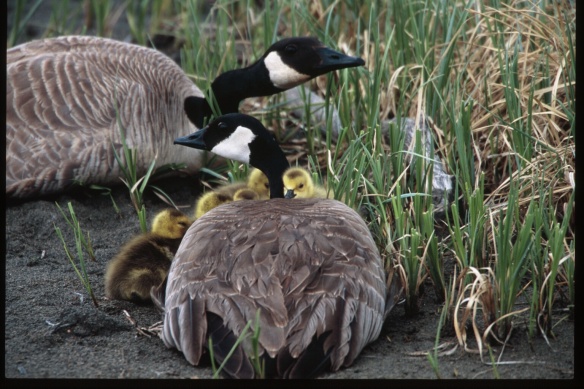 28 thoughts on “A Tale of Two Species”