[…because of old growth logging.  This is reminiscent of killing cormorants because they 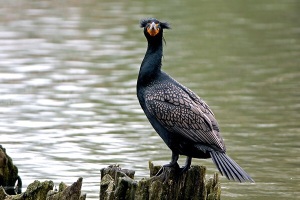 eat salmon and other fish. This policy of kill to “save” is part of an ongoing backside to the same 1800s mentality that caused many of these situations in the first place.]

… It’s a conundrum that scientists and managers are likely to face again and again. “We have many, many species that have changed their historic range, and we’re going to see many, many more with climate change,” says Sallinger.

“If humans caused the problem, I think we’re responsible,” Bown says. “And we need to at least see if there’s something we can do.”

Not everyone agrees. “Now we want to further interfere with nature by killing barred owls by the thousands in order to fix an ecological problem that we likely caused,” says Michael Harris, a lawyer with the animal rights group Friends of Animals. The organization has sued to stop the barred owl removal experiment, arguing that it is counter to the intent of the Migratory Bird Treaty Act, which protects both barred and spotted owls.

“We really can’t just keep interfering,” Harris says. “At some point, then we don’t have anything that’s wild.”

Since fall 2013, 130 barred owls have been shot in the California study site, and the removal of barred owls is slated to begin in Oregon and Washington this fall….

10 thoughts on “Killing Barred Owls because Spotted Owls are Endangered…”