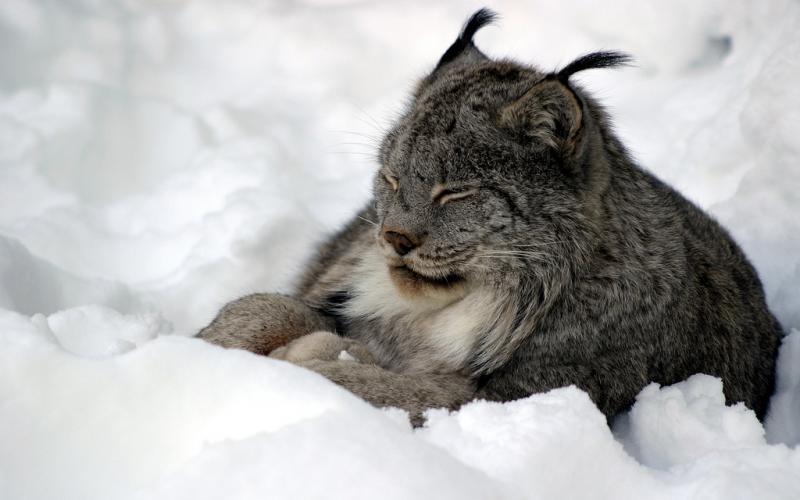 AUGUSTA, ME—Wildlife conservation and animal welfare organizations filed a lawsuit today against the US Fish and Wildlife Service (USFWS) for allowing trappers in Maine to seriously injure and kill Canada lynx, a federally protected cat. Plaintiffs include the Animal Welfare Institute (AWI), the Center for Biological Diversity, and the Wildlife Alliance of Maine (WAM).

Each year Maine trappers targeting coyotes, foxes, mink and other furbearing wildlife seriously injure and kill Canada lynx, one of the rarest wild cats in the United States. Because lynx are protected under the Endangered Species Act (ESA), the state cannot authorize such “incidental” harm to lynx without an incidental take permit issued by the USFWS. Today’s lawsuit challenges the USFWS’ permit issued to the Maine Department of Inland Fisheries and Wildlife last year, which was intended to cover the state’s trapping programs.

“I’m outraged that endangered lynx continue to needlessly suffer and die in cruel traps,” said Collette Adkins, an attorney and biologist at the Center for Biological Diversity. “A few commonsense changes could prevent most of this suffering, but the Service refuses to require Maine’s trapping programs to make those changes.”

“Sickening reports of lynx deaths and injuries, as well as an unknown number of unreported incidents, show that the state and feds are doing a haphazard job providing lynx the protections required under the law,” said Daryl DeJoy, executive director of WAM. “We hope that this lawsuit brings necessary changes to Maine’s trapping programs that will help ensure the lynx’s survival in Maine.”

The challenged permit allows, over the next 15 years, for three trapped lynx to be killed, nine to suffer severe injury and require rehabilitation before release, and 183 to suffer so-called minor injuries and be immediately released. Since the permit was issued in November 2014, trappers have already reported killing two lynx and capturing more than 20 others. More have likely fallen victim to traps, as the USFWS has stated that 75 percent of trapped lynx are not reported.

“As has unfortunately become commonplace within the USFWS, the agency’s biologists advocated for greater protections for the lynx, only to be trumped by agency administrators,” said DJ Schubert, wildlife biologist at AWI. “The USFWS must protect lynx from the suffering and death inherent to trapping with steel-jaw devices and not capitulate to a state agency more interested in a handful of trappers than the protection and recovery of the lynx.”

The organizations object to the use of body-gripping Conibear traps, snares and steel-jaw leghold traps in areas where lynx live. Conibear traps, for example, snap shut in a lethal grip, killing lynx in Maine on numerous occasions; but the USFWS’ permit does not require simple exclusion devices that could be effective in preventing lynx deaths. Today’s lawsuit also challenges Maine’s plan for mitigating harm to lynx, which largely relies on lynx habitat management, even though the USFWS’ own biologists found that the amount of mitigation habitat would be too small to offset the harm to lynx.

“Instead of enforcing the law, the USFWS caved by failing to require the measures needed to protect Canada lynx,” said Doug Ruley, an attorney with the Environmental and Natural Resources Law Clinic at Vermont Law School.

Plaintiffs are represented by the Environmental and Natural Resources Law Clinic and local counsel.

About the Animal Welfare Institute
The Animal Welfare Institute is a nonprofit charitable organization founded in 1951 and dedicated to reducing animal suffering caused by people. AWI engages policymakers, scientists, industry, and the public to achieve better treatment of animals everywhere—in the laboratory, on the farm, in commerce, at home, and in the wild. For more information, visit www.awionline.org.

Complaint Filed Against US Fish and Wildlife Service