Back in 2012, a powerful Arctic cyclone smashed the sea ice with days of wind and powerful waves. This year, a storm that’s nearly as powerful threatens to make a similar mark on late-season melt. With a very unstable Arctic weather pattern in play, there’s an outlier possibility the dynamic is setting up for something even more dramatic by late August.

Earlier today, a strong gale roared up out of the Laptev Sea north of central Siberia. Feeding on the abnormally warm, moist air over the Barents Sea and the hot air over northwestern Siberia, the storm collided with comparatively cold air over the central Arctic. The differences between hot/cold and damp/dry air can really bomb out a storm system. 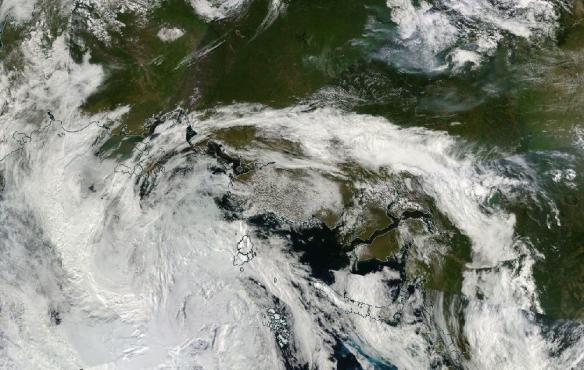 (Storms, heat and moisture feed up through a high-amplitude wave in the Jet Stream over northern Europe and Siberia and into a developing Arctic cyclone over the Laptev Sea during…