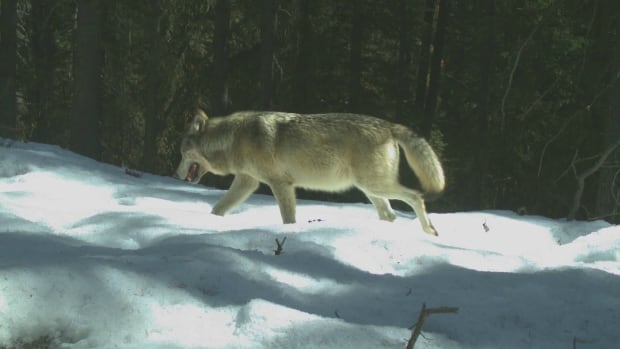 The Bow Valley wolf pack near the Banff townsite is down to two members after a two-year-old male was shot and killed by hunters in B.C. after leaving the park. (Parks Canada)

A wildlife specialist in Banff National Park has hopes the Bow Valley wolf pack will recover after one of its three members was shot and killed by a hunter in B.C. last month.

The two-year-old wolf, known as 1502, was equipped with a tracking collar when it left the park and headed west.

“It’s typical for a wolf around that age to go on a dispersal like that as they find a new territory for themselves and join another pack or form another pack on their own,” said Steve Michel, a Parks Canada human-wildlife conflict specialist.

Wolf 1502 travelled more than 500 linear kilometres until he reached the West Kootenay area where he was killed near Trout Lake, B.C., at the end of March.

There are now two wolves remaining in the Bow Valley pack — an alpha male and a two-year-old female, which would be the sibling to wolf 1502.

Last year, Parks Canada staff estimated the pack had at least nine wolves in the spring. A few months later, staff at the park were forced to put down an alpha female after it exhibited concerning behaviour.

Shortly after, four wolf pups were killed by trains in two separate incidents. Later in the summer, park staff shot a second wolf that had been acting boldly around people at campgrounds.

Michel said despite last year’s devastation of the pack, population numbers are constantly fluctuating and he expects the pack’s population will stabilize in some way in the future.

“Wolf populations are very dynamic,” he said. “The size of the pack is constantly changing, just as we talk about this wolf dispersing, there’s other wolves from other packs in other areas that are dispersing that might come and join in to the Bow Valley pack as well.”

Overall, Michel said, the wolf population in Banff National Park is healthy, but being so close to a busy developed area like the Banff townsite, the Bow Valley wolf pack is constantly under pressure.

“We’ve seen before, in this portion of the park and the Bow Valley, we’ve seen packs completely die out and then a short time later, new packs form and take over similar territorial boundaries. We’ve seen packs merge together, packs overtake other ones.”

“Wolf populations are very dynamic and they’re always in a state of flux.”

5 thoughts on “Bow Valley wolf pack down to 2 after male killed by hunters in B.C.”