Elephant and lion trophies can be imported from Africa again, in a reversal of an Obama-era policy that prohibited the importation of endangered animals.

The U.S. Fish and Wildlife Service announced Wednesday that it will allow trophy hunters to bring back legally hunted wildlife, removing restrictions on permits that were put in place to discourage the hunting and poaching of animals that are on the threatened species list.

The International Wildlife Conservation Council, a newly created arm of the Department of the Interior, wants to bring a focus to the “economic benefits that result from U.S. citizens traveling to foreign nations to engage in hunting.” Plus, it believes “human populations” could benefit from having Americans visit and hunt.

Keep Up With This Story And More By Subscribing Now

The council has determined that hunting in Zimbabwe and Zambia will help with conservation efforts, though its announcement does not include research that supports that view.

“By lifting the import ban on elephant trophies in Zimbabwe and Zambia, the Trump Administration underscored, once again, the importance of sound scientific wildlife management and regulated hunting to the survival and enhancement of game species in this country and worldwide” said Chris Cox, executive director of the National Rifle Association’s Institute for Legislative Action in a statement on the NRA-ILA website.

“This is a significant step forward in having hunting receive the recognition it deserves as a tool of sound wildlife management, which had been all but buried in the previous administration.”

In 2015, the Fish and Wildlife Service suspended the import of sport-hunted elephant trophies, citing a lack of evidence that the practice helped conservation efforts.

The expanded import policy will likely be welcome news to Eric Trump and Donald Trump Jr., who have posted photos of themselves after a trophy hunting expedition. The photos showed them with a leopard and an elephant, and drew criticism from animal rights groups. They have continued to take big-game hunting trips across the U.S. and in Canada, though they haven’t posted photos. 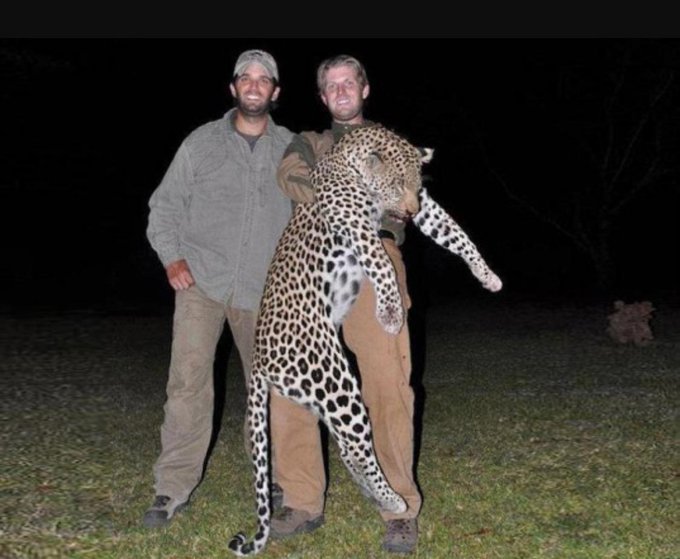 Trophy hunting may be popular with the Trumps, but not everyone is on board. When Minnesota dentist Walter Palmer shot Cecil the Lion in Zimbabwe in 2015, he sparked international outrage for targeting one of the most well-known and beloved African lions. Palmer had a permit to hunt in Zimbabwe, and paid around $50,000 to a professional hunter-guide to kill the lion.

Zimbabwe’s elephant population has declined since 2001, and Zambia’s populations have declined in some regions. Hunters often choose the healthiest or strongest members of animal populations, to have a more impressive trophy, but this can have negative effects on the species overall.

A 2015 poll showed that 86 percent of Americans oppose big-game hunting, and six out of 10 respondents said it should be illegal.

3 thoughts on “HUNTING AFRICAN ANIMALS AND BRINGING THEIR HEADS TO THE U.S. IS LEGAL AGAIN UNDER TRUMP”