Photo: Paul Chinn / The Chronicle
IMAGE 1 OF 6
A gray wolf explores her enclosure at the Oakland Zoo. The wolves can now be found in the wild in the state.
https://www.sfchronicle.com/science/article/Wolves-in-Northern-California-aren-t-just-12898718.php

Seven years after an Oregon wolf named OR-7 caused an international sensation by taking a historic pilgrimage through California, his offspring are settling in the Golden State, starting families and giving every indication that the howling canines are here to stay.

Wildlife biologists regard the re-establishment of Canis lupus in California as a milestone in the country’s decades-long effort to protect and preserve natural habitats and endangered species. Up to 2 million gray wolves once lived in North America, but European settlers, fed by big, bad wolf myths, drove them to near-extinction in the lower 48 states.

The last wild gray wolf in California before OR-7 showed up was killed in 1924.

Four of OR-7’s progeny have been detected in California this year and last, including the leader of the Lassen Pack, which has staked out territory in western Lassen and Plumas counties, according to a recent update on the status of the predators by the California Department of Fish and Wildlife.

Several others could well be roaming through the state undetected, said wildlife biologists, who expect the wolf population in the Golden State to grow.

“It does seem like we are continuing to see wolves entering California, and we have a breeding pack, so the stage is set for population growth,” said Pete Figura, a wildlife management supervisor for the Department of Fish and Wildlife. “It seems to be following the pattern of wolf expansion that we’ve seen over the last 20 or 30 years in the American West.” 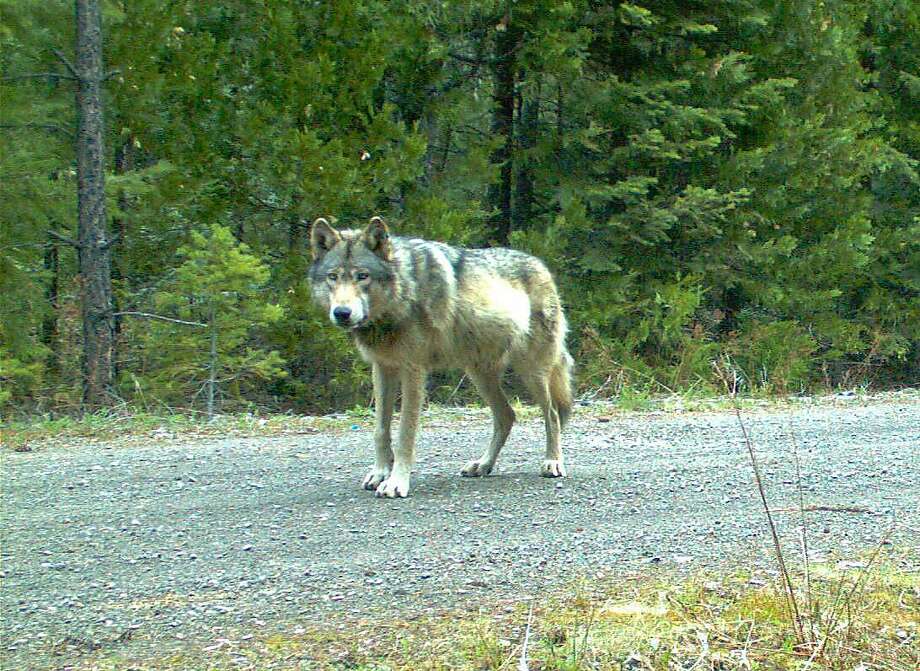 Photo: Oregon Department Of Fish And Wildlife Via Associated Press
Above: The wolf known as OR-7 became the first known wolf to enter California since 1924 in late 2011. Right: A close-up of a female gray wolf at the Oakland Zoo.

OR-7, so named because he was the seventh wolf affixed with a radio collar in Oregon, eventually returned to his home state and found a mate. He is now the alpha male in the Rogue Pack, south of Crater Lake National Park, where he and his mate have raised litters every year since 2014.

One of his sons entered California and started the Lassen Pack, which is often seen in the Indian Valley area north of Quincy, in Plumas County. Known as CA-08M, he and his mate have had four puppies, three of which were spotted by locals and on trail cameras in late March.

“They’ve been fairly visible,” said Amaroq Weiss, the West Coast wolf organizer for the Center for Biological Diversity. “Someone recently posted a video of a pup barking at them.”

An uncollared wolf Figura said is the likely daughter of OR-7 is also in California, where she was observed and tracked in January moving southeast through Siskiyou County.

In January, wildlife biologists tracked another of OR-7’s daughters, OR-54, 500 miles through four California counties. The radio-collared female covered much of the same ground her famous father did from 2011 to 2013. State wildlife biologists said GPS showed she left California in February and then returned to eastern Siskiyou County on April 15.

Another collared wolf known as OR-44 was tracked in March nosing around eastern Siskiyou County, apparently looking for females. He is unrelated to OR-7 or his offspring.

Although conservationists are ecstatic, there is a disturbing element about the uptick in wolf activity. The first breeding pair of wolves ever in California had five puppies in the spring of 2015, all of them sporting distinctive black coats.

The black wolves, known as the Shasta Pack, killed and ate a calf in November 2015, the first reported case of livestock predation by wolves since their return to California. Curiously, that month was also the last time the entire pack was known to be together.

None of the seven were seen again until May 2016, when a single juvenile male was spotted by trail cameras near where it grew up. In March 2017, that same wolf was spotted in northwestern Nevada, the first wolf verified in Nevada in nearly 100 years.

Nobody knows what happened to the other members of the Shasta Pack. Figura said it is possible they all migrated to a new region, but that would be unusual.

Weiss believes the predators, none of which had radio collars, were gunned down. Ranchers in the area had previously threatened to employ the “three S’s” — shoot, shovel and shut up — if any of the sharp-toothed meat-eaters got near their livestock.

“I and others have reason to believe the wolves may have been poached (because) it’s rather difficult for an entire seven member all-black pack to have just disappeared,” Weiss said. “It is disturbing to have California wolf recovery starting out with something so bleak.”

State wildlife officials are trying hard to minimize wolf-livestock conflicts by providing ranchers with the locations of the animals, but not all of the wolves in California have GPS collars. The Lassen Pack traverses both public and private property, including National Park and U.S. Forest Service acreage and ranch and timber lands.

“Even though there are vast areas of forest, there are also little pockets of small towns, so people are going to see them,” Weiss said. “The response has so far been mixed.”

Meanwhile, two more calves in Northern California fell prey to wolves in 2017 and one adult cow is believed to have been killed by the pack hunters.