HELENA, Mont. — A wild wolf known as 926F, dear to the hearts of wolf watchers who visit Yellowstone, was killed by a hunter as it wandered just outside the park last weekend.

A member of the Lamar Canyon pack in the national park’s northeast region, 926F was the daughter of 832F, an alpha female that had become a celebrity, famous for her hunting prowess and for her frequent appearances along the road traveled by tourists in the park’s Lamar Valley.

While wolf biologists called the mother 832F, the she-wolf was famously known as “06” for the year she was born. The subject of the book “American Wolf: A True Story of Survival and Obsession in the West,” she was killed by a hunter as well.

“Everybody’s mourning, everybody’s thinking about what to do to stop this madness,” said Karol Miller, who founded a group of wolf lovers on Facebook called The 06 Legacy. “People love the Lamar Canyon Pack and people know 06 from her New York Times obituary. These are the descendants of 06, her legacy. People love those wolves.”

The shooting occurred near cabins and was within hunting laws; Montana has permitted hunting of wolves since 2011, and a few hundred are killed each year.

“A game warden checked with the hunter and everything about this harvest was legal,” said Abby Nelson, a wolf management specialist with the Montana Department of Fish, Wildlife and Parks.

Help us break the next big story.

But the killing has renewed calls for a buffer around the park so wolves that live within the safe harbor of Yellowstone and that have little fear of humans cannot be shot if they wander beyond the park’s invisible boundary.

Spitfire, or 926F, chased away a grizzly bear that was trying to steal her kill in 2013.CreditDeby Dixon 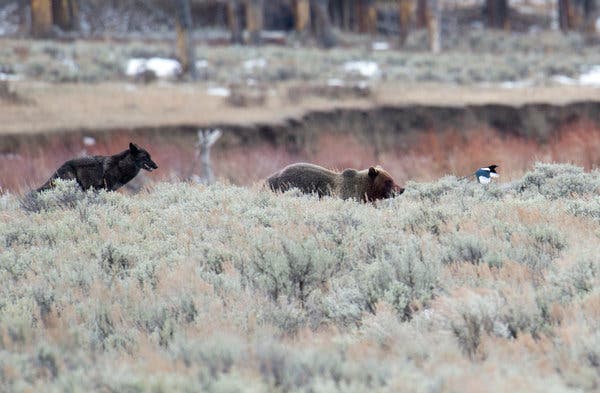 While Montana lawmakers have passed legislation forbidding creation of a buffer zone, there is a hunting limit of two wolves in each of two districts adjacent to the northern boundary of the park.

Still, wolf hunting near Yellowstone has been extremely controversial, highlighting the clash between the New West’s ecotourism and the Old West’s hunting to protect game and livestock.

Wolves were restored to the park in the 1990s and quickly grew in number. About 100 wolves belong to 10 packs in Yellowstone, which is considered the ideal park for sightings of the animals as they hunt elk, feed on carcasses and play with their pups. Some 1,700 wolves live in the Northern Rocky Mountain states of Montana, Idaho and Wyoming.

5 thoughts on “Famous Alpha Wolf’s Daughter, Spitfire, Is Killed by a Hunter”