(CNN)Greta Thunberg, a 15-year-old student from Sweden, captured the attention of the world recently when she shamed climate change negotiators at a United Nations climate summit in Poland.

“You are not mature enough to tell it like is,” she said at the COP24 summit, which ended late Saturday night after two weeks of tense negotiations. “Even that burden you leave to us children. But I don’t care about being popular. I care about climate justice and the living planet.” 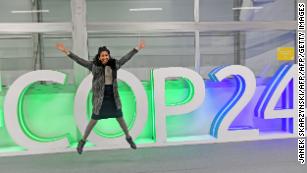 COP24 climate talks end in agreement — barely
The climate talks resulted in nearly 200 nations agreeing to a set of rules that will govern the Paris Agreement on climate change, which aims to limit warming to 1.5 degrees Celsius over pre-Industrial levels. Even the negotiators know they’re not doing nearly enough to reach that goal and avoid disastrous effects of climate chance, which include the end of coral reefs, rising seas, stronger superstorms and deadlier heatwaves.
Thunberg and other young people emerged as among the strongest moral voices at the talks, which went into overtime amid disputes about the scientific consensus on global warming, which has shown for decades that burning coal, oil and gas wreaks havoc on people and the planet. 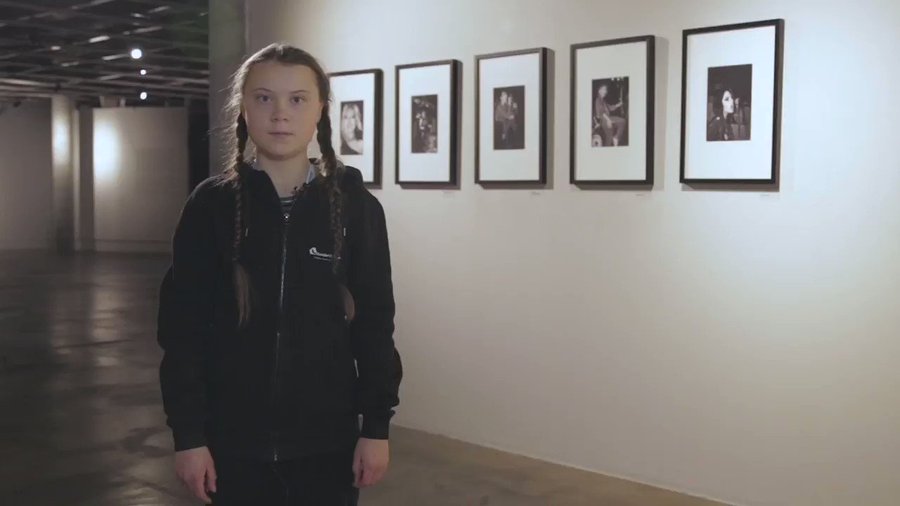 3,111 people are talking about this
Twitter Ads info and privacy
The teen has inspired thousands of young people around the world to walk out of their schools on Fridays to demand adults take more action to protect their futures and those of future generations. She decided to walk out of her own school in Sweden, she told CNN, by herself. No one joined her the first day, she said. Then she kept at it, inspiring thousands.
close dialog
Receive Fareed Zakaria’s Global Analysis
including insights and must-reads of world news
People started joining me,” she said.
Last Friday, a number of students left their classes and walked into the conference center in Katowice, Poland, where the UN talks were held. They held signs that, together, read: “12 years left.” That’s a reference to the latest dire report from the Intergovernmental Panel on Climate Change, which says global climate targets could become impossible in just 12 years. The report says emissions need to be cut about in half by 2030, which would require a near-complete overhaul of the global energy system.
“Adults sometimes forget about the young people,” said Małgorzata Czachowska, one of the Polish students inspired by Thunberg. 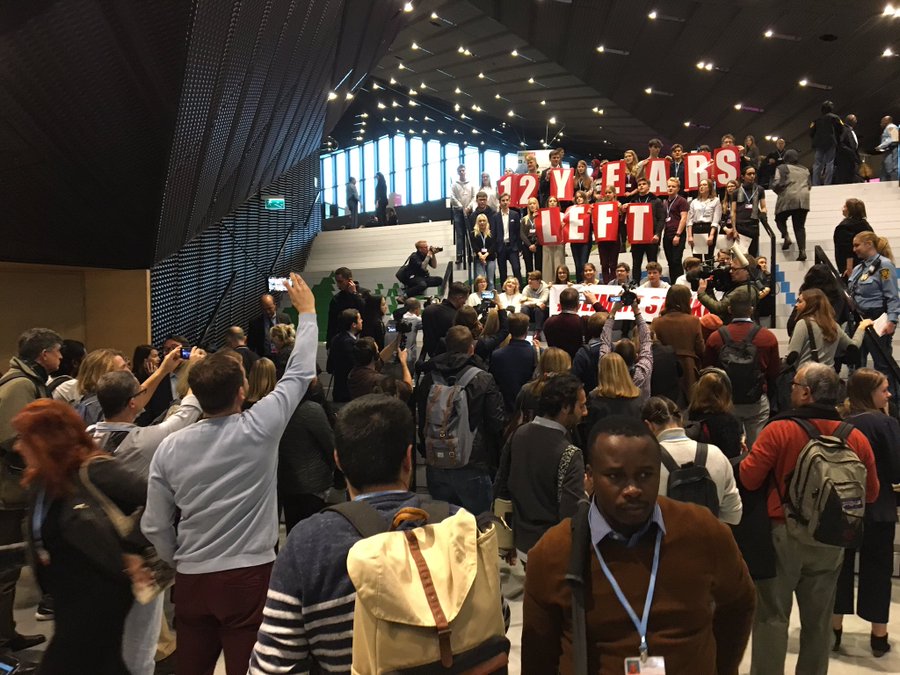 Wider shot so you can get a sense of how much media interest these kids are drawing. Inspired by Swedish 15 yr old. Calling for global school walk out. Critical moment in the fight against fossil fuels and climate change. #COP24 #ClimateStrike

122 people are talking about this
Twitter Ads info and privacy
Toby Thorpe heard about Thunberg in Tasmania, Australia, and led a walkout of his own. That led to more than 10,000 students walking out of classes, he told CNN. He and others hope that effort will grow.
Thunberg, who describes herself on Twitter as a “15 year old climate activist with Asperger’s,” said she was inspired by the school walkouts in the United States that followed the deadly school shooting in Parkland, Florida.
She is asking students around the world to walk out of their classes each Friday to demand adults take climate action. Those actions include big systems changes like transitioning to cleaner sources of energy including wind and solar power. Thunberg told CNN she doesn’t fly, doesn’t eat meat (beef is a major contributor to climate change) and tries not to buy new things unless they’re absolutely necessary in order to do her part. 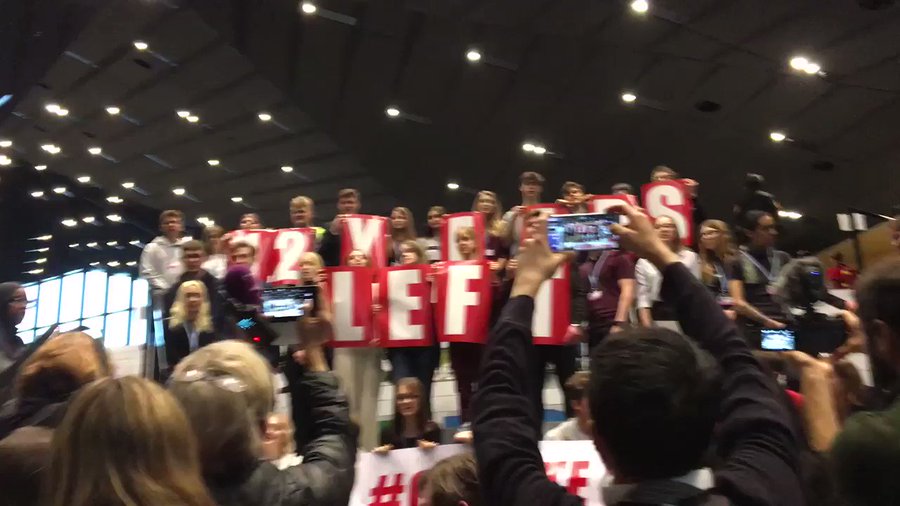 “All I want to say is that they don’t really care about us.”

See John D. Sutter’s other Tweets
Twitter Ads info and privacy
She uses the hashtags #climatestrike and #fridaysforfuture.
“We have done this many times before and with so little results,” she told CNN. “Something big needs to happen. People need to realize our political leaders have failed us. And we need to take action into our own hands.”
Here is the full text of her speech at COP24 in Poland:
My name is Greta Thunberg. I am 15 years old. I am from Sweden.
I speak on behalf of Climate Justice Now.
Many people say that Sweden is just a small country and it doesn’t matter what we do.
But I’ve learned you are never too small to make a difference.
And if a few children can get headlines all over the world just by not going to school, then imagine what we could all do together if we really wanted to. But to do that, we have to speak clearly, no matter how uncomfortable that may be.
You only speak of green eternal economic growth because you are too scared of being unpopular. You only talk about moving forward with the same bad ideas that got us into this mess, even when the only sensible thing to do is pull the emergency brake.
You are not mature enough to tell it like is. Even that burden you leave to us children. But I don’t care about being popular. I care about climate justice and the living planet.
Our civilization is being sacrificed for the opportunity of a very small number of people to continue making enormous amounts of money.
Our biosphere is being sacrificed so that rich people in countries like mine can live in luxury. It is the sufferings of the many which pay for the luxuries of the few.
The year 2078, I will celebrate my 75th birthday. If I have children maybe they will spend that day with me. Maybe they will ask me about you. Maybe they will ask why you didn’t do anything while there still was time to act.
You say you love your children above all else, and yet you are stealing their future in front of their very eyes.
Until you start focusing on what needs to be done rather than what is politically possible, there is no hope. We cannot solve a crisis without treating it as a crisis.
We need to keep the fossil fuels in the ground, and we need to focus on equity. And if solutions within the system are so impossible to find, maybe we should change the system itself.
We have not come here to beg world leaders to care. You have ignored us in the past and you will ignore us again.
We have run out of excuses and we are running out of time.
We have come here to let you know that change is coming, whether you like it or not. The real power belongs to the people.
Thank you.