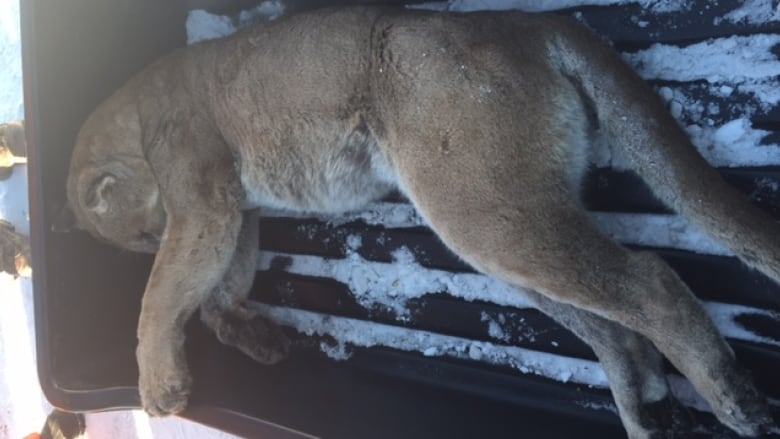 The cougar was pulled from the trap sometime between Dec. 28 and Dec. 31. (Supplied)

A Manitoba trapper is sorry a rare and protected animal species was caught in one of his snares.

Gerry Sherman went out last week to check his snares in Duck Mountain Provincial Forest near Gilbert Plains, Man., and at first thought he snagged a wolf. But when he got closer, he realized it was something else — a cougar, a rare species that used to live in Manitoba but was driven out of the province.

“I wondered what I was supposed to do because I knew it was a [protected] species,” Sherman told CBC. “The proper thing that I came up with was take it out of the snare and take it home and once I got home I called Manitoba Conservation.”

Sherman is a registered trapper and uses the provincial forest, which borders Duck Mountain Provincial Park, with permission.

He said a pair of Manitoba Conservation officers came and picked up the animal on New Year’s Day and were very understanding about the whole ordeal.

“I am really sorry that it happened,” Sherman added. “Nobody likes to catch endangered species.”

“I am really sorry that it happened” – Gerry Sherman

Bill Watkins is a wildlife biologist with the province. He confirmed the wild cat was caught sometime between December 28th and 31st.

“It’s what we refer to as bycatch,” he said. “There’s no way that a trapper could control the animals that wander into the trap. It was set for wolves so everything is completely legitimate.”

Watkins said that while the find was concerning, it could be a sign that the cougar population is recolonizing Manitoba. The animals were very rare in the province up until about six years ago.

Now, there are two to three sightings per year. A sign, according to Watkins, that they could be repopulating. The latest estimates pegged the population in Manitoba at fewer than 50.

Sherman said it’s the first time he’s heard of a cougar being caught in the Duck Mountains. He believes the animal will be stuffed and put on display at the Duck Mountain Interpretive Centre near Minitonas, Man., once it’s been inspected by a biologist.

“It’s a magnificent animal,” he said. “Anyone destroying these animals at will should be punished. On an accidental catch like this there is really nothing anyone can do.”

Not the first time

It’s the second time in just months that a cougar has been accidentally caught in Manitoba.

A female cougar was caught and killed near Boissevain, Man., on Nov. 21.

Watkins, at the time, said it is possible that the animal wandered up from North or South Dakota.

20 thoughts on “Manitoba trapper sorry after cougar caught in snare”