It might be the Year of the Pig in China, but cows are stealing the spotlight in the American political sphere.

This isn’t all good news for our bovine friends. No. They exist now with a target on their backs, thanks to a confluence of factors, including climate change, the rise of US congresswoman Alexandria Ocasio-Cortez, her advocacy for a so-called “Green New Deal,” and a desire by conservatives to score cheap political points.

Let’s stop—only for a moment—and with intention aim our deepest condolences toward the humble and hardworking American cow, which became a focal point in several speeches given at the recent Conservative Political Action Conference (CPAC) in National Harbor, Maryland.

“You know, with this Green New Deal, they’re trying to get rid of all the cows,” said Republican lawmaker Mark Meadows. “But I’ve got good news: Chick-fil-A stock will go way up because we are gonna be eating more chicken!”

Republican senator Ted Cruz joked that PETA would start supporting his party since Democrats want to “kill all the cows.” Sebastian Gorka, a former White House official, said Democrats want to “take away your hamburgers… this is what Stalin dreamt about but never achieved.” And the hyper-conservative president of Liberty University, Jerry Falwell Jr., joked he was keeping an eye on Ocasio-Cortez. “You just let Alexandria Cortez show up at my house and try to take my cows away,” Falwell said. 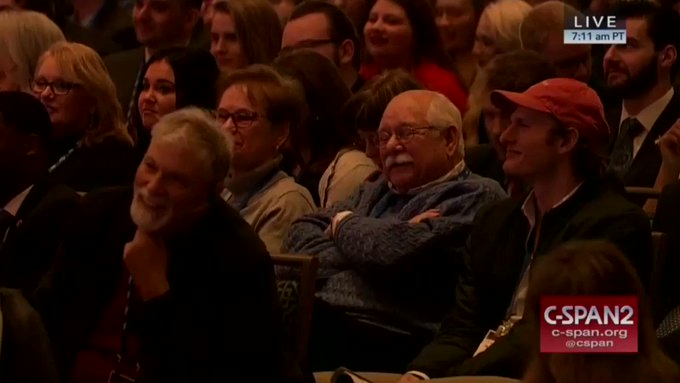 CPAC speakers have said a lot of wild stuff about Democrats wanting to ban cows. Here’s a supercut.

So what gives? Why is this staple of American agriculture suddenly a political football?

When rolling out a relatively toothless plan for the so-called Green New Deal, freshman Democrat Ocasio-Cortez released to the public a fact sheet that said getting carbon emissions to net zero within a decade would be tough because “we aren’t sure that we’ll be able to full get rid of farting cows.”

It’s a smart point to make, but it was also one that could become political talking point for Republicans.

When considering how the food system impacts global climate change, the United Nations has estimated that the livestock sector contributes 14.5% of total manmade greenhouse gas emissions. Beef and milk production make up the majority of that—including from the methane that cows expel. So addressing cows is important. Talking so plainly about getting rid of them, though, was widely considered a flub.

Meat is already under siege

Outfits such as the World Health Organization—bolstered by a growing body of scientific evidence—have linked red and processed meats with certain types of cancer, as well as heart disease. That recognition has coincided with calls for people to reduce the amount of red meat they eat.

Warnings about the healthfulness of beef has already had some meat industry trade publications decrying what they consider a “war on meat.”

The bottom-line is that cows are taking fire from two different angles: health and environmental. A misstep by Democrats has turned them into a political talking point, and suddenly Americans are being asked to think a little bit more critically about the animals.