Animal archeology could reveal where sea otters lived in past, how tool use evolved 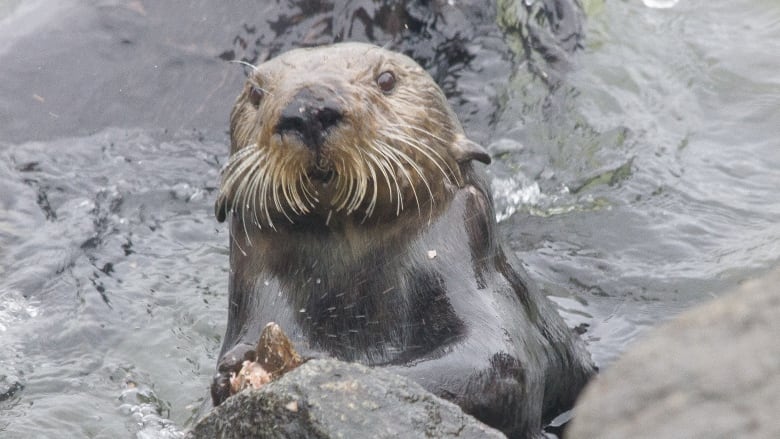 A sea otter cracks open mussels with a rock at Elkhorn Slough, near the study site. (Jessica Fujii/Monterey Bay Aquarium)

Archeologists dig up clues about the lives of ancient humans by studying the tools and piles of trash they left behind. Now, it turns out they can do the same thing with another species of skilled tool users in the midst of their own “Stone Age” — sea otters.

This kind of “animal archeology” could open up a new window into the past and has already generated new discoveries, such as the fact that most otters appear to be right-handed, researchers say.

Sea otters use stones as tools to pound and crack open snails, mussels, clams and other seafood that can be hard to open with their teeth and paws.

It turns out all that pounding can also be damaging to the shell-cracking tools involved — that is, the stones — “creating a distinctive archeological record that parallels and may even pre-date that of the humans they currently live alongside,” reports a new study led by Michael Haslam, an independent archeologist based in London, England.

Within their first hour of being out there, they had already found something that we’d missed for decades.– Tim Tinker, biologist

Canadian biologist Tim Tinker, a co-author of the new paper published today in the journal Scientific Reports, has been studying sea otters on the California coast with his team for decades. He had noticed their pounding leaves the shells unusually damaged.

“They’re the most destructive things in the natural environment other than humans,” said Tinker, an adjunct professor at the University of California, Dalhousie University and the University of Victoria, who is now based in Halifax. “There’s really nothing that can smash a clam or urchin or snail with the same sort of force that a sea otter can.” 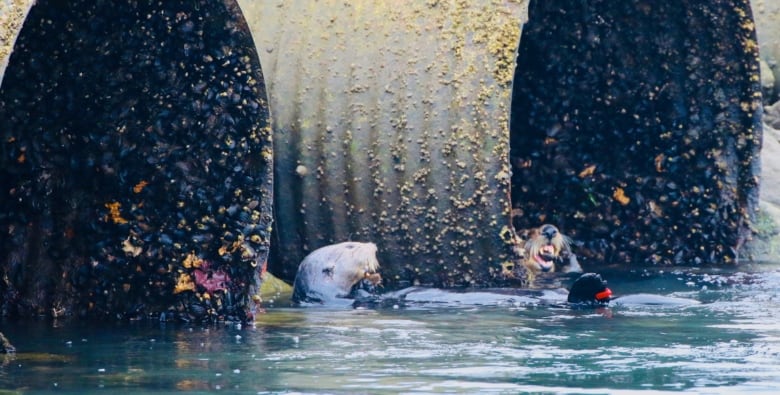 Several years ago, Haslam, then a research fellow at Oxford University, invited Tinker to a meeting about the new field of “animal archeology.” Haslam had studied the use of stone tools in monkeys and apes using archeological techniques, and proposed doing similar research on sea otters.

Tinker said he was skeptical, since sea otters mostly use rocks that they collect in the bottom of the ocean. After use, they drop the rocks back into the sea, where they would be very difficult to find again.

But he invited Haslam and Natalie Uomini, an archeologist and anthropologist at Max Planck Institute for the Science of Human History, to California to see the otters. 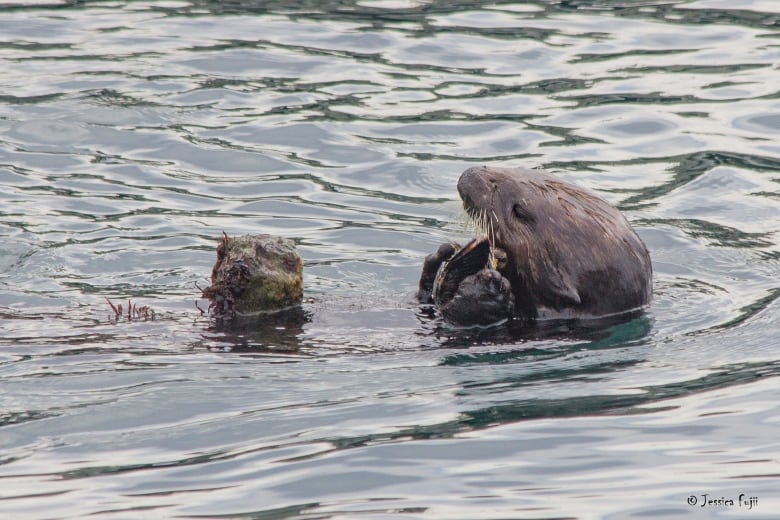 A sea otter eats a mussel that it opened with a stone that it rests on its belly. (Jessica Fujii/Monterey Bay Aquarium)

After visiting several sites where sea otters were floating on their backs, carrying rocks on their chests and using them to crack food open, Tinker and his team took their visitors to Bennett Slough Culverts in Moss Landing, Calif., where otters pull off and eat mussels encrusted on a series of drainage pipes. The otters can’t collect stones from the bottom there because it’s muddy. But humans had piled rocks along the side of the road that the otters were pounding the mussels on.

Tinker, a biologist, said the archeologists “immediately did something we’d never done — climbed down, scrambled over the rocks, right down into the water, basically, and started studying the rocks that the otters were pounding their mussels on.”

Uomini recalls that initially, they didn’t see anything unusual about the rocks. Then they started noticing broken mussel shells piled up in certain places.

“At first we thought, ‘Hey, that’s funny. Somebody must have come here, and had a picnic and eaten loads of mussels,'” said Uomini, who mostly studies stone tools made by ancient human relatives 500,000 to a million years ago..

Then it occurred to her that since the mussels were raw, that “somebody” was probably otters, not humans.

“And then we realized these piles of mussels were everywhere, and that there were damaged rocks near them.” 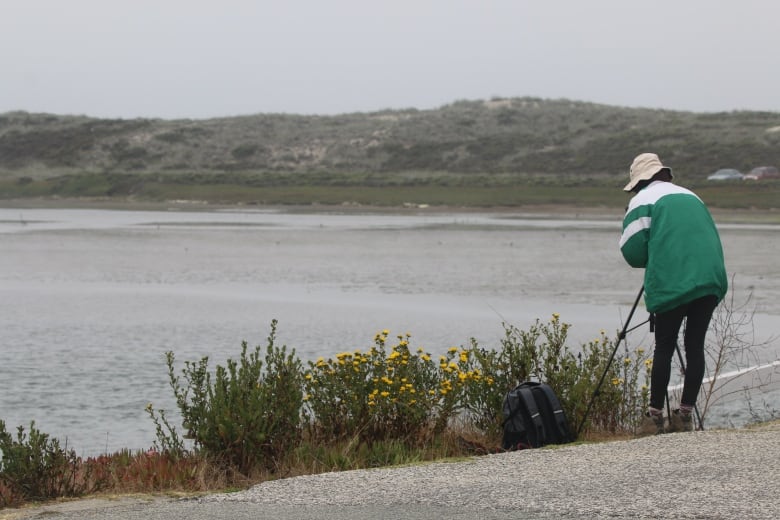 Tinker said he was dumbfounded: “Within their first hour of being out there, they had already found something that we’d missed for decades.”

That highlights the power of researchers from very different disciplines working together on problem “and bringing different ways of looking at nature together,” he added.

The team examined the piles of shells, which the archeologists call middens — the same word used to describe the trash heaps left by ancient humans that are also a rich source of archeological information.

They shot video of the otters pounding the mussels against the rocks and mapped the rocks themselves.

They found the otters tend to pound on points and ridges on the side of the rocks facing the water, leaving them smooth, worn down and lighter in colour. 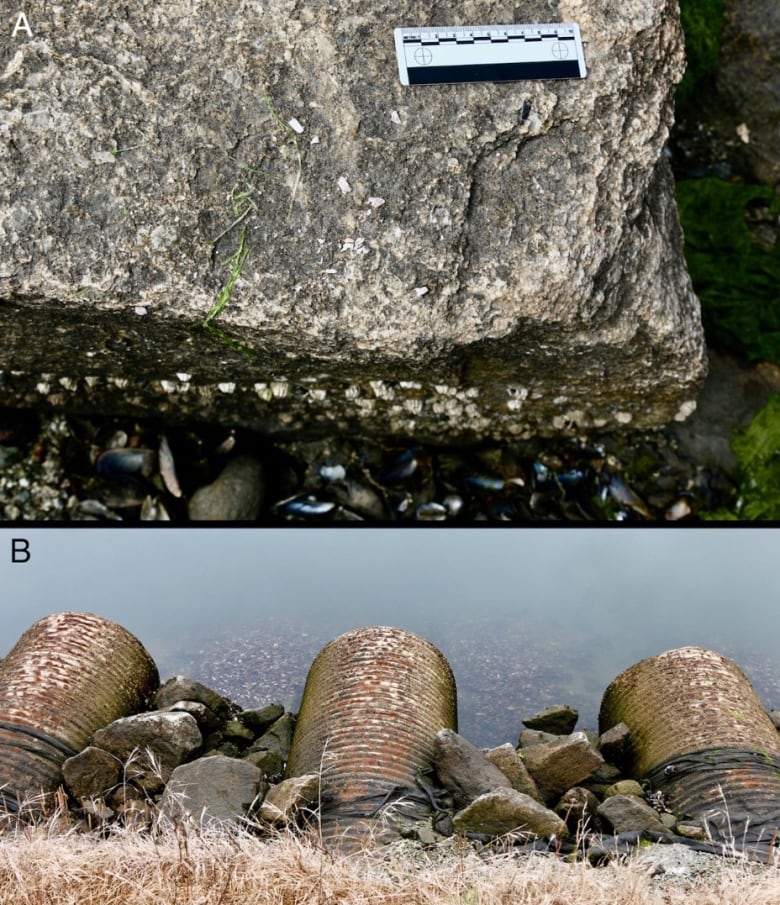 The otters pound mussels on ridges and points on the side of the rocks facing the water, causing characteristic damage. (Michael Haslam)

The pounded shells also show an unusual pattern — the right shell is always broken, and the left never is.

Tinker said video observations showed the otters were holding the shells in a very precise way as they pounded.

“Right before they hit the rock, they slightly twist the shell so that their right hand is the one that’s really smashing it on the rock,” he said. The finding suggests that most otters — like most humans — are right handed. 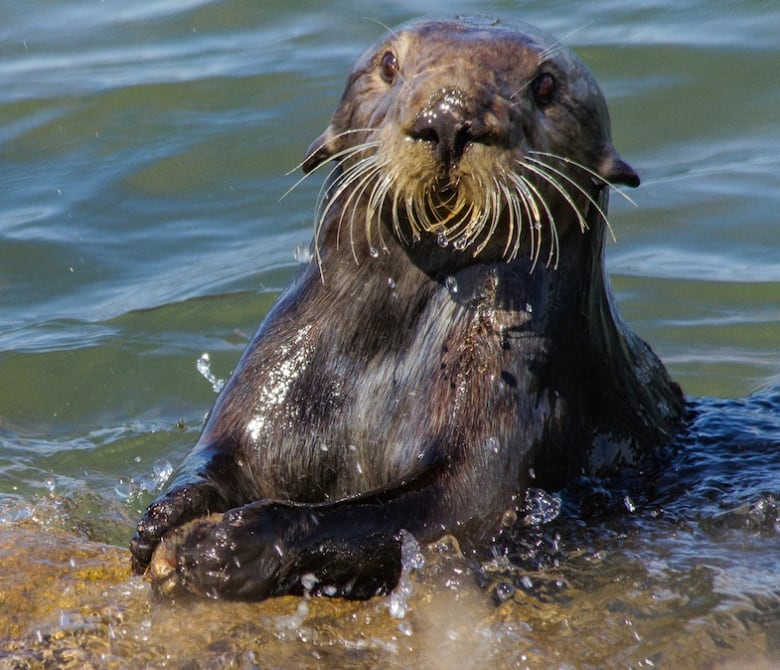 Jessica Fujii, a senior research biologist with the Monterey Bay Aquarium and co-author of the paper, says the team hopes to see if they can find similar patterns on similar rocks at other locations used by otters. So far, they’re not sure if those patterns apply just to otters eating mussels or if they’re similar for other shellfish.

By looking for those sea otter signatures from the past, researchers may be able to uncover new information, such as how widely they were distributed before they were nearly wiped out by the fur trade in the early 20th century. (They are currently still listed as endangered on the IUCN Red List, threatened in the U.S., and a species of special concern in Canada). It may even be possible to get information about how sea otters’ diets have evolved over time or how and when tool use evolved in sea otters, the researchers suggest.

And knowing what rocks — and piles of shells — look like after being pounded by a feasting otter can prevent archeologists from confusing them from those left behind by ancient humans, the researchers note. Previously, Tinker said, biologists had assumed that because sea otters moved so much from place to place, they never left big piles of shells in any one place. But it turns out some underwater otter middens at Bennett Slough Culverts could contain more than 100,000 shells. Similar piles may well have been mistaken for human middens in the past. 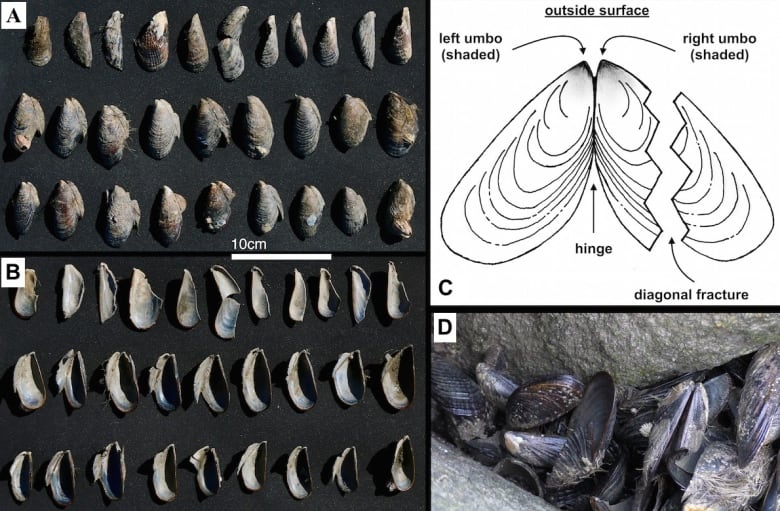 Sea otters leave the right side of the mussel shell broken and the left side unbroken. Observations suggest they tend to be right-handed. (Michael Haslam/Neil Smith/Scientific Reports)

Erin Rechsteiner is a research ecologist with the Hakai Institute and a PhD candidate at the University of Victoria who studies sea otters on the B.C. coast. She wasn’t involved in the study, but has worked with some of the co-authors.

She says B.C. sea otters use rocks to pry abalone off boulders or break open shells.

“You rarely see them eating snails without using a rock.”

She has never seen them using fixed boulders like the ones at Bennett Slough Culverts, but wonders if they break mussel shells open the same way with individual rocks.

Rechsteiner said she thinks looking for an archeological record for otters is a “cool idea.”

“I think it could give us a lot of insights into the past.”

The new study was funded by the European Research Council, the Max Planck Institute for the Science of Human History, the Monterey Bay Aquarium, the US Geological Survey and the University of California, Santa Cruz.