After years or revisions, scores of contentious meetings, an outside mediator and the abandonment of talks by half of the stakeholders, Oregon wildlife commissioners approved the state’s long-overdue Wolf Management Plan on Friday.

In a 6 to 1 vote, the 155-page plan, which governs how wolves are handled in the areas of the state where they don’t enjoy federal protection under the Endangered Species Act, was approved by the seven-member commission of the Oregon Department of Fish and Wildlife.

Before several hours of public testimony began, Commissioner Holly Akenson, who recounted her past experience studying wolves as a wildlife biologist, acknowledged the tension that surrounded the process, but noted the growth in Oregon’s wolf population and called the state’s previous management a success.

“We see a lot of concern on both sides of this plan,” she said. “For someone like me, who has looked forward to seeing wolves living free on our landscape, it’s time to celebrate.”

The state’s first wolf plan was issued in 2005, before any wolves had actually come back to the state after decades of extirpation due to hunting and trapping. Language in the original plan called for updates every five years and, in 2010, just a year after wolves had been confirmed in the northeast corner of Oregon, the second version of the plan was released. At the time, at least 21 of the canids were known to wander the state’s rural areas.

When it came time to update the plan for 2015, though, stakeholders on both sides — hunters and ranchers on one side, environmentalists and wolf advocates on the other — couldn’t come to a consensus on some of the most sensitive issues. Over the following years, facilitated meetings were held all over the state in an effort to find compromise between the two sides.

The talks grew so rancorous that, in January, the environmental groups pulled out of negotiations, calling the process “biased, superficial and unscientific. 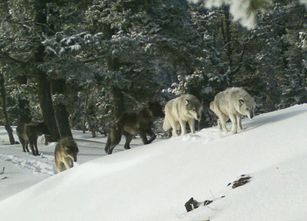 The main sticking points in past negotiations have come over when and how lethal action can be taken against wolves that kill livestock.

Much of the tension surrounding the wolf plan boils down to when wolves can be killed, why and by whom. The latest revision has some key changes to the plan’s most controversial provisions.

Under the old plan, a wolf that attacked livestock twice or more over any period of time was deemed a “chronic depredator” and could be killed in the eastern third of the state, where wolves are managed by the state. The new plan will allow the state to kill wolves after two confirmed attacks during a nine month period.

State officials have stressed that when a wolf meets that threshold, it doesn’t necessarily mean it will be killed. Non-lethal deterrents like fencing, alarm devices, hazing and removal of carcasses must be documented before a permit to kill a wolf can be issued. Even then, the state can exercise its own discretion, taking other factors into account before allowing a wolf to be killed.

“Discretion is more valuable than an actual number,” said Derek Broman, the state’s carnivore coordinator and one of the key architects of the plan. “When lethal action is taken, it’s not retribution.”

Once a wolf is deemed a chronic threat to livestock, however, the state can issue a permit for lethal action against the animal and, because staff and resources available to the state are limited, those permits can be issued to members of the public. That kind of action, called “controlled take,” was clarified in an amendment to the plan that said any permits issued to the public would require approval from the commission. Still, wolf advocates remained fiercely opposed to the provision, saying it could open the door to wolf hunts by the general public.

“With just 137 wolves in the state, it is absurd that ODFW would put hunting on the table,” Sristi Kamal, Northwest representative of Defenders of Wildlife, told commissioners. A spokesman for Rep. Peter DeFazio read a letter from the Oregon congressman that called for the provision allowing permitted hunting by the public, even under very specific circumstances, to be stripped from the plan.

Akenson responded that the commission would not issue permits lightly.

“This commission isn’t going to meet and say ‘Yep, let’s do it.’” she said. “It’s going to be a deliberative process.”

Numerous ranchers and hunters expressed concern over some aspects of the plan. Many said the state didn’t do enough to track wolves, particularly in Wallowa County, where the majority of wolves reside and most attacks on livestock take place. When a wolf is suspected of killing livestock, it must be confirmed by an investigation and many ranchers said it could take up to a week for investigators to show up, time when evidence can degrade and a confirmation becomes more difficult. Without a confirmation, ranchers aren’t eligible for compensation from the state.

“Ranchers get compensation for confirmed or probable kills,” Earl Nelson, a rancher from Douglas County, told the commission. “But the bar is set too high for kills to ever be counted.”

Others livestock producers said, given the continued growth of the wolf population, the state should establish “management zones,” defined geographic areas that would have a maximum number of wolves. Any wolves in the area beyond the maximum could be killed.

Though both sides found parts of the plan they disagreed with, many in the ranching community urged commissioners to adopt the plan as it was written, while environmental advocates pressed officials to revise the plan or remove the provisions they found most troubling.

After public comment concluded, Commissioner Gregory Wolley, the sole “no” vote, acknowledged the divide in the room.

“We have one side that seems to support the plan despite its imperfections, while the other side is 100 percent against it,” he said. “We say we’re trying to go down the middle, but that doesn’t sound like a compromise.”

Friday’s commission meeting came against the backdrop of a push from federal regulators to strip the wolf of protections under the Endangered Species Act. That plan, like Oregon’s plan but on a larger scale, has been met with condemnation from advocates and scientists, but was welcomed by hunters and ranching industry groups.