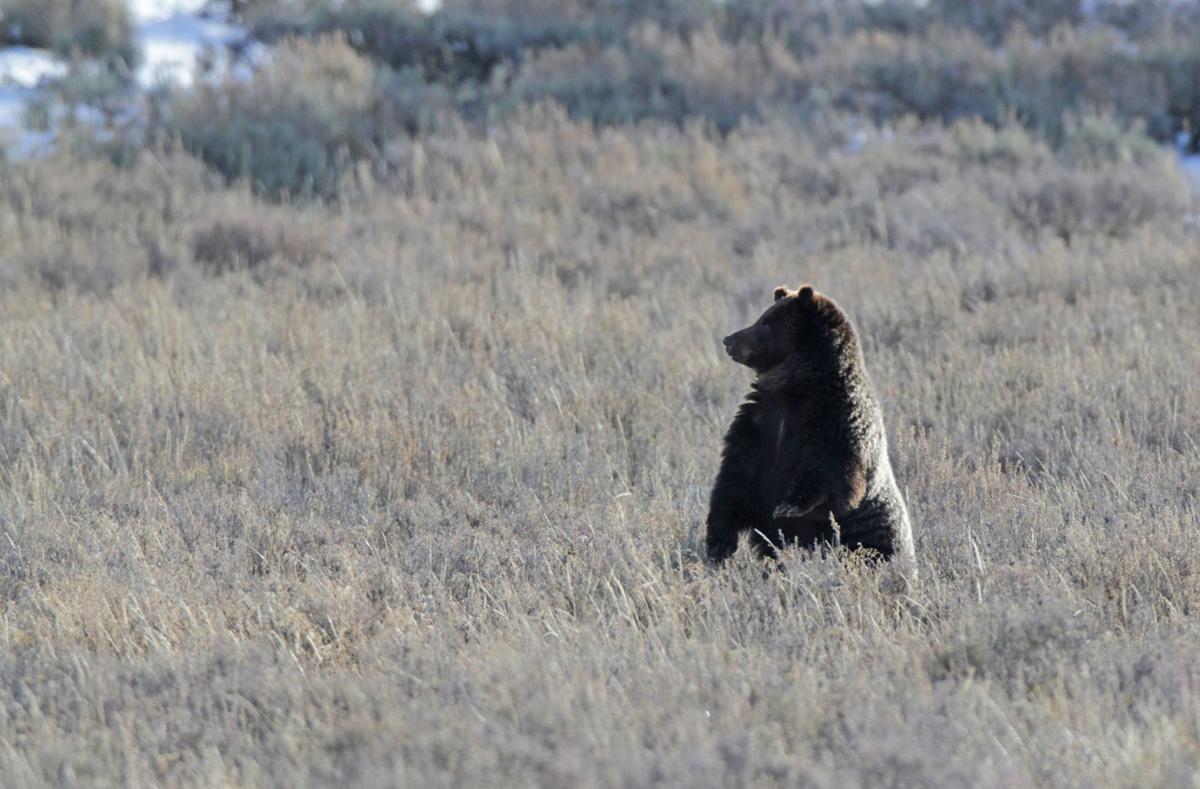 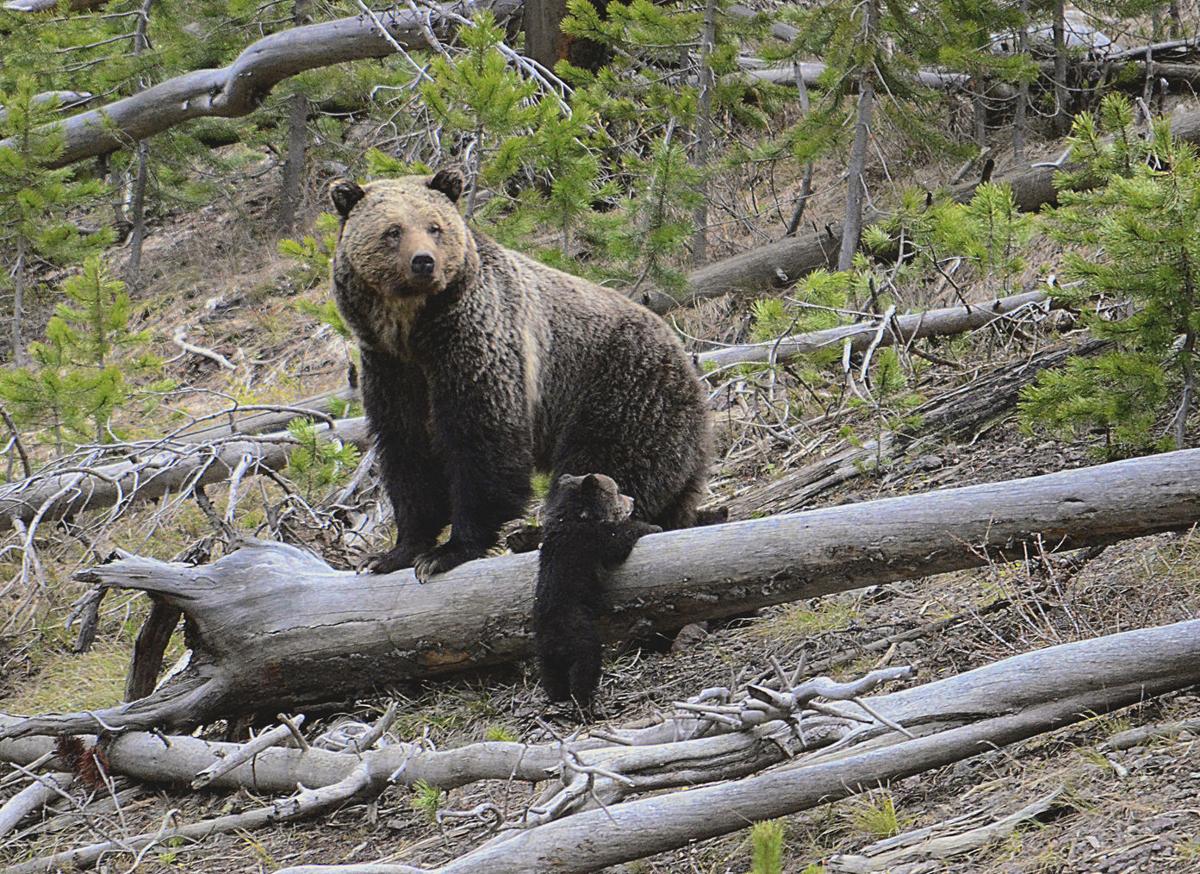 This April 29 photo provided by the United States Geological Survey shows a grizzly bear and a cub along the Gibbon River in Yellowstone National Park.

The federal government should be looking at restoring grizzly bears throughout the Rocky Mountains from Arizona and California to Washington, according to a lawsuit filed by the Centers for Biological Diversity on Thursday.

And the U.S. Fish and Wildlife Service must also update grizzly recovery plans it hasn’t touched since 1993, the suit alleges. The environmental group filed the case with U.S. District Court Judge Dana Christensen in Missoula. Last fall, Christensen vacated the service’s attempt to delist grizzlies in the Greater Yellowstone Ecosystem from federal Endangered Species Act protection. The federal government has appealed that ruling to the U.S. 9th Circuit Court of Appeals.

“They just want to point to success in the Greater Yellowstone Ecosystem, remove protections and wash their hands of grizzly bears,” CBD attorney Collette Adkins said on Thursday. “We’re saying you can only achieve true recovery if you look at these other areas and evaluate whether those are places grizzlies can recover. We want the Fish and Wildlife Service to take a look at least at the places it identified itself in the 1993 plan, and do what they promised — evaluate those additional areas.”

Fish and Wildlife Service grizzly recovery coordinator Hilary Cooley said the service had received the lawsuit, but had no further comment on Thursday.

The grizzly bear received threatened status under the Endangered Species Act in 1975. Before the Lewis and Clark expedition in 1805, an estimated 50,000 grizzlies inhabited most of the states west of North Dakota and south to Mexico. Due to loss of habitat and predator-removal efforts, only a few hundred grizzlies remained on about 2% of their historical range by the 1970s in the lower 48 states.

Today, about 2,000 grizzlies roam remote parts of Montana, Idaho and Wyoming, with most concentrated around Yellowstone National Park and the Northern Continental Divide Ecosystem between Missoula and Glacier National Park. The FWS 1993 recovery plan also monitors small grizzly populations in Montana’s Cabinet-Yaak Ecosystem and Idaho’s Selkirk Ecosystem, as well as large swaths of the Bitterroot Ecosystem along the Montana-Idaho border and the North Cascades Ecosystem in Washington that have no known resident grizzlies.

* I understand and agree that registration on or use of this site constitutes agreement to its user agreement and privacy policy.

The CBD lawsuit claims that the 1993 plan stated the service would evaluate within five years the potential for grizzly recovery in the San Juan Mountains of Colorado. In a 2011 update, the service stated “other areas throughout the historic range of the grizzly bear in the lower 48 states should be evaluated to determine their habitat suitability for grizzly bear recovery.” Those other areas included parts of New Mexico, Arizona, Utah, California, Nevada, Oregon and southern Washington.

The Fish and Wildlife Service created a plan to reintroduce grizzlies as an experimental population in the Bitterroots in 2000, but the project was never funded and drew opposition from both people who argued the bears threatened their safety and people who said the plan didn’t extend enough protection for the bears. A similar reintroduction plan is under consideration for the North Cascades Ecosystem.

The suit also alleges the Endangered Species Act requires the Fish and Wildlife Service to produce five-year updates on the grizzly’s recovery status, which the service hasn’t done since 2011. While CBD acknowledges the service updated its recovery plans for the Greater Yellowstone and Northern Continental Divide ecosystems in advance of attempts to delist those populations, the group maintains the service has to include the whole continental United States recovery area. Adkins said CBD petitioned the service to update the plan in 2014, but was refused.

“There are other areas in the West that fall in the historic range of grizzly bears where they could be reintroduced and do very well,” CBD attorney Andrea Santarsiere said on Thursday. “We know they’re important carnivores that have benefits on ecosystems, so if that reintroduction is successful, we would see some ecosystem benefits. It’s not like we’re proposing to introduce grizzly bears into city centers. We’re talking about wild landscapes where conflict is very low or nonexistent, and areas where they’ve survived in the past.”