The Carters from Edmonton, Alberta, were part of a tour organised by Legelela Safaris when they shot and killed the lion.

A Canadian trophy-hunter, who was slammed for kissing his partner beside a lion they had just shot and killed in Africa, has now been disowned by his own daughter.

The couple from Edmonton, Alberta, was part of a tour organised by Legelela Safaris when they shot and killed the magnificent animal.

“The tour operator regularly shares snaps of dead animals alongside proud hunters, often grinning as they hold up their guns, on their Facebook page,” reports Daily Mail.

Other photos showing Darren and Carolyn Carter posing in front of another dead lion were captioned: “There is nothing like hunting the king of the jungle in the sands of the Kalahari. Well done to the happy huntress and the team…”

As the pictures went viral on social media, the Carters were called “murderers”, “disgusting” and “cowardly.” 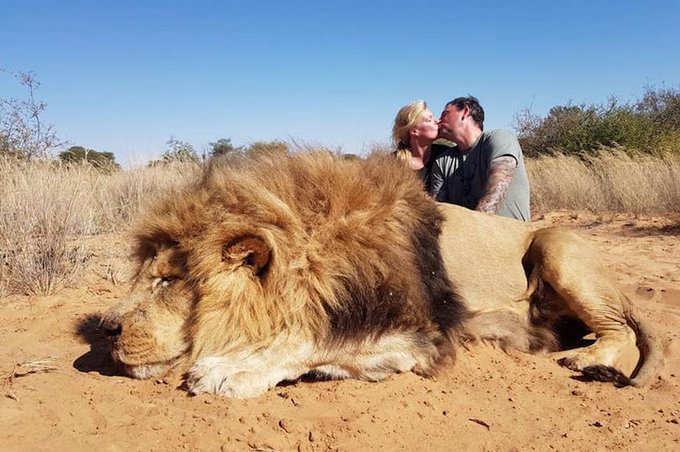 56 people are talking about this

Beyond disgusting! This is how they get their kicks. So disturbing.

Canadian couple kiss and pose for photo by dead lion they killed.

Not brave. Not cool. Cowardly to the extreme. What sad sad souls to kill such a majestic & beautiful animal.

248 people are talking about this

The pictures along with the Facebook page of Legelela Safaris have since been deleted. On July 16, Darren’s daughter took to YouTube to express her disgust.

“That just make me sick,” she said. “Like, I refuse to call him my dad anymore. Who does that? I’ll never understand people like that, that take pride in shooting a beautiful animal like a lion. … [K]nowing you trophy hunt beautiful animals like lions who are slowly getting endangered is just, it’s too much. I’m someone who loves animals and I never want anyone to hurt them. To know that my own father does that, I don’t even consider you my dad anymore,” she said in a 10-minute long video.

The Carters, who run a taxidermy business, have described themselves as “passionate conservationists” despite their trophy-hunting expeditions, reports Daily Mirror. “We aren’t interested in commenting on that at all. It’s too political,” Darren was quoted as saying.

Eduardo Goncalves, the founder of the Campaign to Ban Trophy Hunting, believes the lions were captive and bred for the sole purpose of being killed by hunters.

“It looks as though this lion was a tame animal killed in an enclosure, bred for the sole purpose of being the subject of a smug selfie,” he was quoted as saying by the Daily Mail.

“This couple should be utterly ashamed of themselves, not showing off and snogging for the cameras.”