AUGUST 12, 2019 BY DONNY MOSSAs crowds entered the Bronx Zoo on Saturday, August 10th, dozens of activists with the Nonhuman Rights Project staged a protest at the entrance to demand that the Wildlife Conservation Society, which runs the zoo, release an elephant named Happy to a sanctuary after holding her captive in a small enclosure since 1977.

Happy is a 48 year old wild-born Asian elephant who was captured in Thailand and brought to the United States in the 1970s.  She has been held captive in the Bronx Zoo since 1977 and has lived alone in a barren one acre enclosure for the past 13 years. During the winter month, she is intensively confined to a small cement cell. 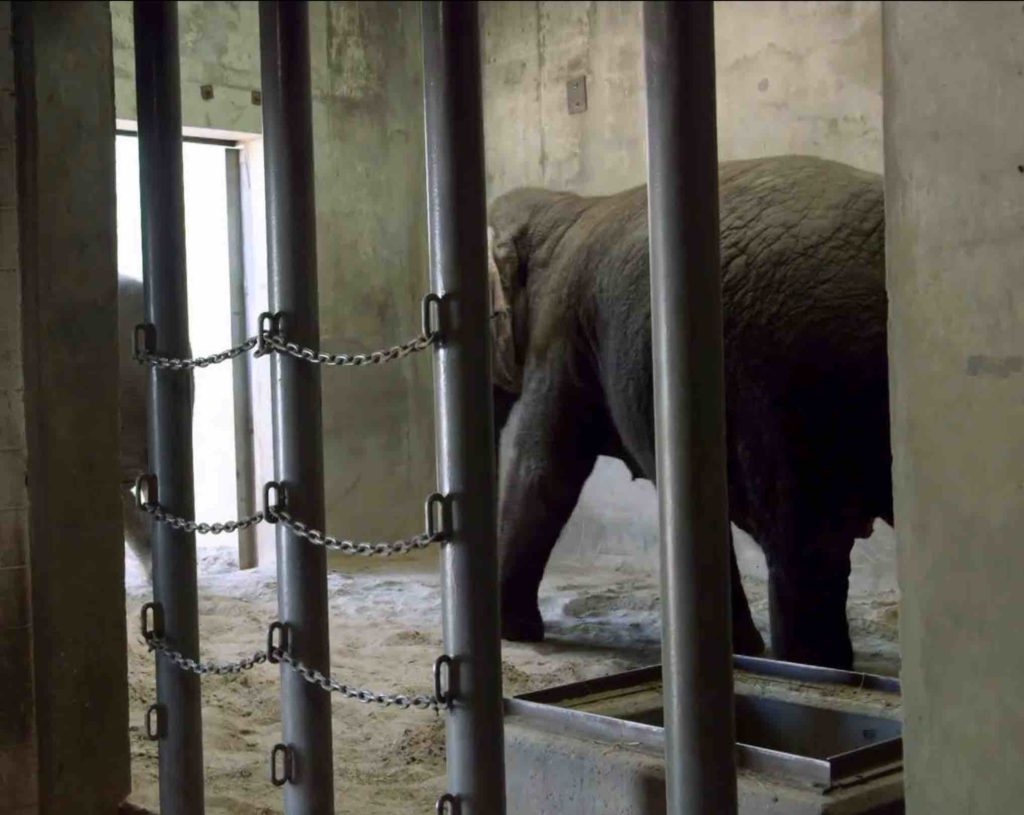 During the winter months, Happy (not pictured here) is held in this barren enclosure in the Bronx Zoo

“Elephants are social animals who need the companionship of other elephants,” said Kevin Schneider, the Executive Director of the Nonhuman Rights Project, “It’s no wonder that we see her swaying and engaging in other unnatural behaviors that indicate distress and suffering.” 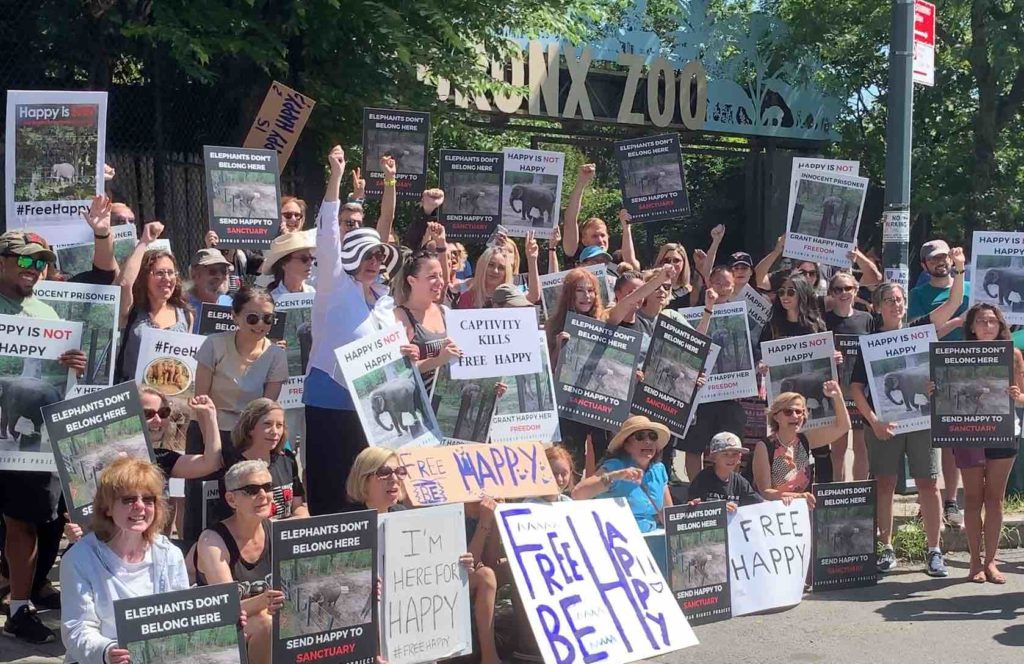 Activists with the Nonhuman Rights Project demand that the Wildlife Conservation Society release Happy, an elephant held captive at the zoo since 1977, to a sanctuary

Both of the elephant sanctuaries in the United States, the Elephant Sanctuary in Tennessee and the Performing Animal Welfare Society in California, have agreed to take Happy at no cost to the Bronx Zoo, but the WCS has refused to let her go.  “The Wildlife Conservation Society acknowledged in 2006 that keeping Happy alone would be inhumane, so we don’t understand why they won’t release her from captivity,” said Schneider. “They either don’t want to acknowledge that Happy’s solitary confinement for the past 13 years has been cruel , or they don’t want to cave into pressure from animal rights advocates.” 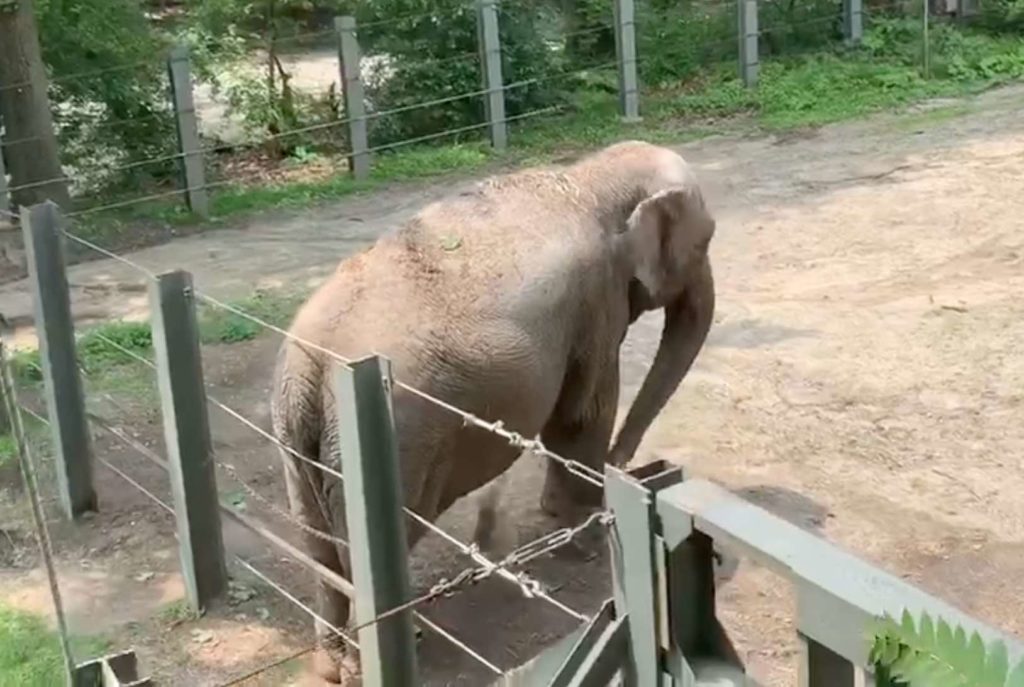 During the warm months, Happy is held captive and alone in a one acre enclosure.

In 2018, the Nonhuman Rights Project filed a petition for a common law writ of habeas corpus in New York Supreme Court demanding recognition of Happy’s legal personhood and her fundamental right to bodily liberty. Happy is first elephant in the world to have a habeas corpus hearing to determine the lawfulness of her imprisonment.

As litigation proceeds, public support for the Happy’s freedom has grown. In June, two elected officials made public statements encouraging the WCS to free Happy. Corey Johnson, the Speaker of the New York City Council, wrote, “Happy and all elephants need more space and resources than the zoo can provide, plain and simple.  I urge the Bronx Zoo, which first planned to close the elephant exhibit back in 2006, to finally transfer Happy to one of two recommended sanctuaries so that she can enjoy the company of other elephants and the benefits afforded to a facility specifically designed to meet her needs.”  In a tweet, U.S. Representative Alexandria Ocasio-Cortez, who has voiced her opposition to solitary confinement for prison inmates, said that “The team and I are looking into what we can do” to free Happy. 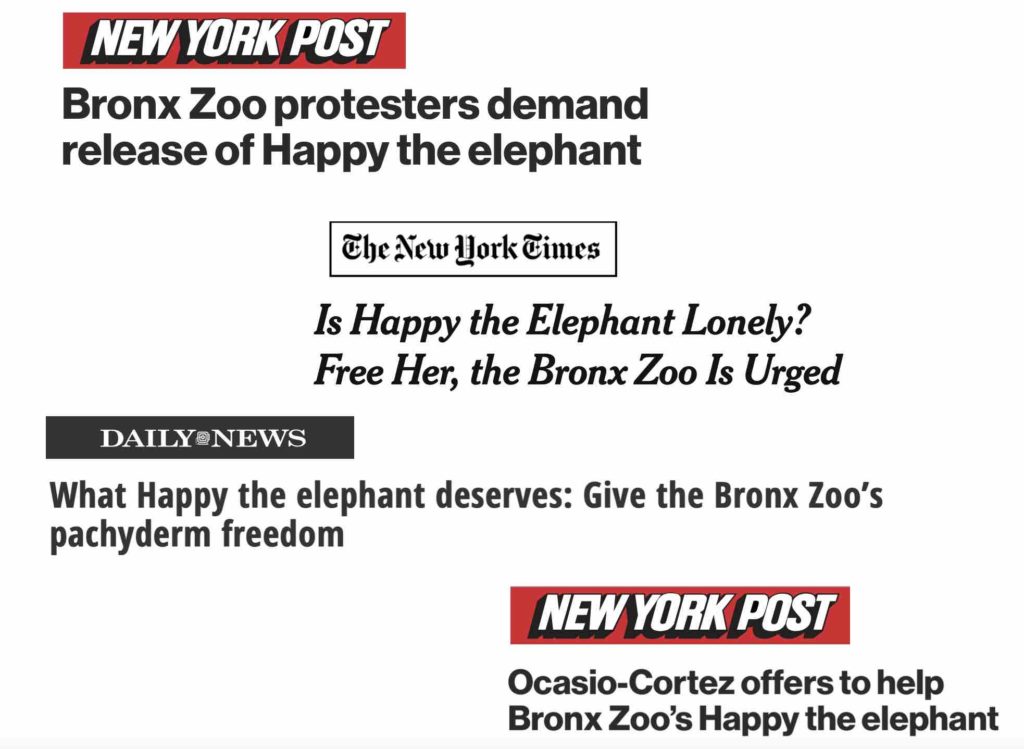 In 2015, the animal advocacy group In Defense of Animals ranked the Bronx Zoo the fifth worst zoo in the United States for elephants. “The Bronx Zoo does not have the space, the resources, or the weather conditions that elephants need to live a reasonably healthy life. Shame on the Bronx Zoo for sentencing “Happy” to what is likely the most unhappy of sentences for an elephant: a life of self­ aware solitary confinement.”

A Change.org petition demanding an end to Happy’s solitary confinement has garnered over one million signatures.