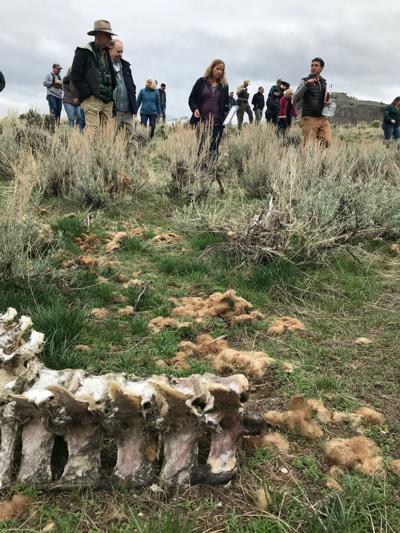 A backbone and scattered chunks of fur are all that remain of a bison killed by hunters near Beattie Gulch, one of two popular bison hunting areas north of Gardiner and Yellowstone National Park.

A Gardiner-area landowner is suing the National Park Service and U.S. Forest Service to halt the hunting of bison just outside Yellowstone National Park’s northern border, saying the agencies have failed to analyze the consequences of the hunt as required by law.

“The Park Service and Forest Service have never analyzed the impacts of hunting on private property owners, neighbors, and visitors” through the appropriate environmental process required by law, stated the complaint by Bonnie Lynn and Neighbors Against Bison Slaughter, which shares her address.

Lynn is seeking a permanent halt to any future bison killing within a mile of her home and rental cabins as well as a temporary restraining order to stop the hunt this winter.

The lawsuit argued that rather than address the situation, “the Federal Agencies have foisted the dangerous and concentrated impacts of bison hunting onto a small group of private property owners, neighbors, and visitors.”

The complaint specifically focuses on Forest Service land known as Beattie Gulch, which is just across the road from Lynn’s residence. Each winter and spring, as bison migrate out of Yellowstone in search of forage, tribal and state hunters concentrate at the pinch point to kill the big ungulates.

In the most extreme case, 389 bison were killed on the land in the winter of 2016-17, the majority of them by tribal hunters exercising their treaty rights. Bison gut piles, legs and other remains are often left behind after the hunts, attracting predators such as bears and wolves as well as scavenger birds.

The second complaint, filed by Lynn and L&W Construction LLC, is seeking $500,000 from the federal government claiming that because predators and birds have sometimes spread the carrion to her property it is a taking of her property rights, physically occupying her land, without just compensation. Bison are known carriers of brucellosis, a disease that can cause undulant fever in humans.

Lynn’s two complaints were filed Tuesday in a District of Columbia federal court. One of the attorneys representing her is former Montana U.S. House candidate Jared Pettinato.