The Wuhan coronavirus that has killed at least 17 people and infected more than 600 spreads more easily from person to person than previously thought, according to a World Health Organization (WHO) official.

“We are now seeing second and third generation spread,” said Dr. David Heymann, the chairperson of a WHO committee that is gathering data on the virus.

Third generation means that someone who became infected after handling animals at the market in Wuhan, China, spreads the virus to someone else, who then spreads it to a third person.

The virus initially appeared to spread only by very close contact that would typically occur within a family, such as hugging, kissing, or sharing eating utensils, Heymann said.

Now, he says evidence is accruing that shows more distant contact could spread the virus, such as if a sick person were to sneeze or cough near someone else’s face.

He said there is no evidence at this point that the virus is airborne and could be spread across a room, as happens with the flu or measles. 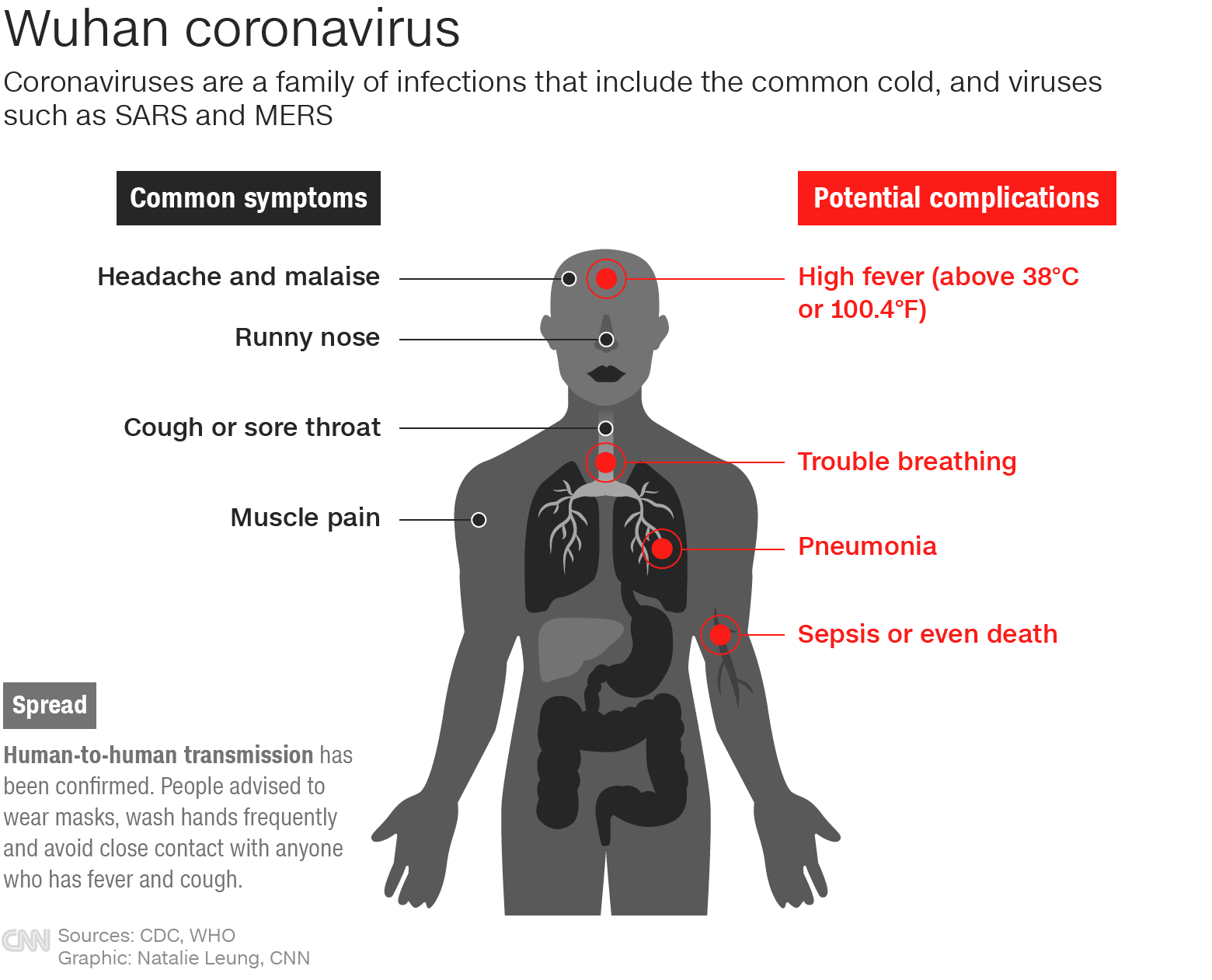 Travel restrictions have been put in place in Ezhou, the third Chinese city to be affected by measures aimed at controlling the spread of coronavirus.

Ezhou’s railway station has been closed “in order to fully conduct prevention and control of the new type of pneumonia causing coronavirus, effectively cut off the transmission of the virus, resolutely curb the spread of the epidemic, and ensure the safety and health of the people,” according to a Thursday statement from the Ezhou City Coronavirus Disease Prevention Control Headquarters.

Earlier in the day public transport and long distance transport networks were suspended in nearby Huanggang, according to its municipal government.

Cars coming in and out of the city will be checked and searched, and people will have their temperatures taken.

Airline Cathay Dragon announced Thursday it is suspending flights to and from Wuhan amid the deadly coronavirus outbreak.

“In light of the evolving situation in Wuhan, Cathay Dragon is temporarily suspending flights to and from Wuhan effective January 24, 2020 until 29 February, 2020,” said the company in a statement.

“We are monitoring the situation closely and will continue to coordinate with the health authorities in Hong Kong and in all the ports to which we operate flights.”

Cathay Pacific stock declined 2.1% in Hong Kong Thursday as the aviation sector comes under pressure amid the spread of the coronavirus.

Authorities in Beijing have canceled all large-scale Chinese New Year celebrations in an effort to contain the growing spread of Wuhan coronavirus.

“In order to control the epidemic, protect people’s lives and health, reduce the mass gathering and ensure people to have a harmonious and peaceful Spring Festival, it is decided to cancel all the large-scale events, including temple fairs, in Beijing as of today,” read a Thursday statement from the governmental Beijing Culture and Tourism Bureau.

“Citizens shall strengthen the preventative measures and support the decision. We will notify the policy changes with the epidemic development … And wish all citizens a happy Spring Festival,” the statement continued.

Wuhan, where the coronavirus outbreak originated, is the capital city of Hubei province in Central China.

The city is widely referred to as having a population of 11 million. This includes migrant workers and other residents who do not have Wuhan residency registration, and who are hence not included in the national census.

The city is home to some of the top universities in China, including Huazhong University of Science and Technology (ranked ninth in the country), Wuhan University (ranked 12th) and China University of Geosciences (23rd in China).

Tennis player Li Na hails from the city, which is also famous as the birthplace of the 1911 armed uprising that eventually overthrew China’s last imperial dynasty.

In 2018 the city had 398 hospitals and 17 centers for disease control and prevention out of a total 6,340 medical institutions.

Wuhan has a total number of 95,300 beds in hospitals and community clinics, and 136,300 people are employed in its medical institutions.

The average life expectancy in the city is 81.29 years.

Huanggang, a neighboring city about 80 kilometers (50 miles) east of Wuhan, will be effectively locked down due to risks associated with the spread of the Wuhan coronavirus, Chinese state media reported.

The Hubei Huanggang New-type Coronavirus Pneumonia Prevention and Control Command, a task force set up to deal with the crisis, said in a statement that at midnight, the city’s subway and train stations will close, per a report in the People’s Daily, a state-run newspaper. All theaters, internet cafes and indoor public culture, tourism and entertainment facilities in the city will also stop business, People’s Daily reported.

Like Wuhan, Huanggang is located on the banks of the Yangtze River. The entire administrative area of Huanggang has a population of 7.5 million, but People’s Daily reported that the lockdown only applies to the urban area, which is only a part of the total population. 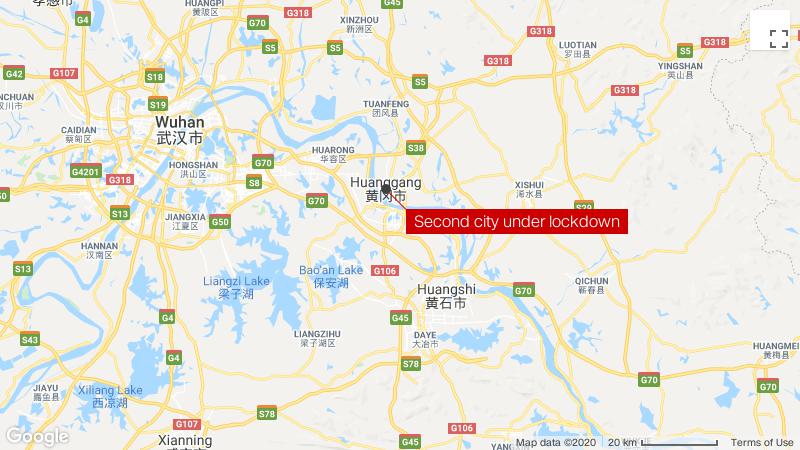 Regional health authorities in China have confirmed 13 new cases of the Wuhan coronavirus, bringing the total number of cases in mainland China to 611.

Those are the first cases that have been confirmed in Xinjiang and Shaanxi — meaning that of the 22 provinces, five autonomous regions, two special administrative regions and four municipalities under the control of the People’s Republic of China, only five have not reported confirmed cases of the Wuhan coronavirus as of midday Thursday.

The Hong Kong government has not formally confirmed the presence of the virus in the city, but said it is investigating two “highly suspected” cases. Preliminary tests of the first individual were positive for the virus.

The self-governing island of Taiwan has reported a confirmed case of the coronavirus.

The Wuhan New-type Coronavirus Pneumonia Command — a task-force set up to deal with the crisis — said in a statement that Wuhan has a sufficient supply and reserve of food, medical supplies and commodities.

“There is no need for the general public of the city to panic or hoard in order to prevent unnecessary wastes,” the command said.

However, there is still unease among many in the city.

Jan Renders, a 29-year-old PhD student in Wuhan, told CNN that many shops are closing for the Lunar New Year holiday, so many people had already been stocking up on supplies. Renders, who has lived in Wuhan for the last two and a half months, said he was able to stock up on food for at least a week.

“But of course people aren’t sure whether shops will be going back to normal soon,” he said.

Another man in Wuhan sent CNN a picture inside a grocery store Thursday morning that showed several empty shelves. The man, who asked not to be identified, said most of the food was sold out.

Wuhan, the city where the outbreak originated, is home to more than 11 million people — that’s as big, or bigger than London, the largest city by population in the European Union.

It’s the biggest city in all of central China — and unsurprisingly, is considered the political, economic and transport capital of the region.

Located in Hubei province on the confluence of the Yangtze River and its largest tributary, the Han River, the city is often referred to as “jiu sheng tong qu,” meaning it’s considered the main thoroughfare of nine provinces.

In other words, Wuhan is huge and densely populated, with people coming and going every day — making the outbreak and lockdown a nightmare for authorities, especially ahead of Lunar New Year this weekend.

To put it in perspective: The lockdown is like closing down all transportation for a city more than three times the size of Chicago, two days before Christmas.

More about Wuhan: Wuhan is a major manufacturing city with a heavy focus on automobile and medical equipment: Bosch and PSA both relocated their China headquarters to Wuhan recently.

The city, spanning 8,494 square kilometers, has played a major role in the government’s plan to rejuvenate the nation’s central region for more than a decade.

But the city’s historical importance can be traced back more than 3,000 years. Wuhan is listed as one of the Famous Historical and Culture Cities by the state and is home to the ruins of Panlong City.

The Wuhan New-type Coronavirus Pneumonia Command — a Chinese task-force set up to deal with the crisis — has announced the closure of highways out of the city, a move it called a “necessary act to stop the spreading of the epidemic.”

However, minutes later the announcement was removed from the website. It’s unclear why.

The decision to effectively cut off Wuhan from the rest of the world has sparked fears among some on social media about the availability of food and medicine inside the city.

Flights out of Wuhan had already been suspended and public transport in the city has stopped.

Fear and anxiety is mounting in China, with controversy on social media over residents who apparently fled Wuhan ahead of the partial lockdown enforced on Thursday.

On the microblogging platform Weibo, people shared their fears over the virus, as well as cautionary warnings. “Don’t panic and try not to go out,” one person warned.

Another person posted they had thought about fleeing Wuhan. “I was thinking about my parents and children — if I bring them, where can we escape to?” read the post.

“Tomorrow will there be a line to snatch supplies? Will the next step be to send troops here to maintain order? By spring, will this explode into an epidemic? Or by May, will Wuhan have been restored to peace and goodness?”

The rush to get out has even got its own hashtag on Weibo — #EscapeFromWuhan.

But the mass exodus has been met with anger from many Weibo users, who accused people leaving Wuhan of being selfish and irresponsible as they could then potentially spread the virus.

“Wuhan people, get out of Shanghai,” one person posted. “Don’t sneak in and spread chaos.”