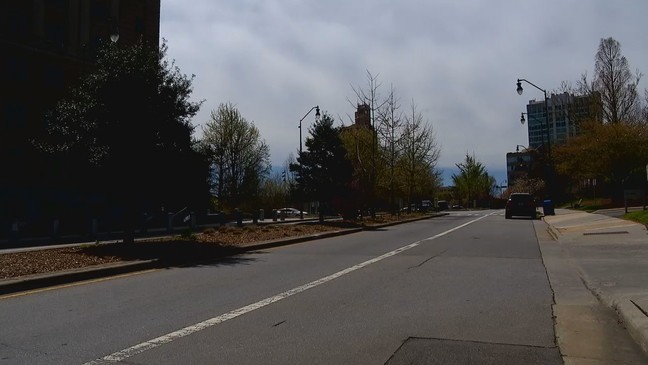 This bear took advantage of an empty downtown Asheville on Thursday, using the opportunity to explore. (Photo: WLOS staff)

ASHEVILLE, N.C. (WLOS) – It was a quiet afternoon in downtown Asheville on Thursday. The streets were mostly empty with very few people out and about.

One visitor took advantage of an empty downtown and used it as an opportunity to explore. A black bear wandered the streets as a few remaining workers watched.

“Wow, a bear in downtown Asheville. I never thought I’d see the day, ” said Tamara Hardy, who is classified as an essential worker.

A block away, two courthouse workers were eating lunch with a safe six-foot distance between them.

“Yes, we are trying to do our best to social distance,” Jenna Walley said.

Both said they think people are taking orders to stay at home seriously.

“There’s hardly anyone on the road, at least when I am driving in and out,” Tim Henderson said. “That makes the commute outstanding.”

Both agree it would be nice to see a bustling downtown area again, but that can only happen one way.

“Maintain these social distancing guidelines. Everyone should do that so eventually we can come back out,” Henderson said.

“Please stay home. It’s important for the health of the community and other people that are at risk and certainly the hospitals,” Walley said.

That message was echoed by county leaders.

“If you don’t have an urgent or pressing need to be out, you need to be at home,” BunCombe County’s Eric Barnes said during a Thursday afternoon update.

County officials believe that, generally, people are following the guidelines for social distancing.

“I would say that most people are following this guidance,” said Jennifer Mullendore, of Buncombe County Health and Human Services. “I see couples out for walks. I see families walking their dogs. I don’t see a lot of people congregating.”

The city closed all parks last week. City workers have gone as far as removing netting from basketball hoops to discourage people from congregating.

Asheville police said they will be enforcing the closure. They will first issue warnings to those who violate the closure. Repeat offenders will be ticketed.

Greenspaces and city trails will remain open for now, but still the city wants to make sure people are keeping the proper distance.