(CNN Business)With meat prices on the rise, a plant-based protein purveyor is making a play for consumers’ pocketbooks.

Beyond Meat (BYND)next week plans to launch a value pack of its plant-based burger patties for sale in retailers’ frozen food sections. The Cookout Classic 10-pack, which Beyond Meat is positioning as a limited-edition product, was developed as a way to sell patties that otherwise would have been produced for restaurants, which have been devastated by the pandemic and stay-at-home measures.
The company wants to narrow the price gap between plant-based and animal meat, Chuck Muth, Beyond Meat’s chief growth officer, said via email to CNN Business. The 10-pack has a suggested retail price of $15.99, or $1.60 per quarter-pound patty. By comparison, Beyond Meat’s two-patty pack sells for $5.99, just shy of $3 per patty.
The product launch comes at a time when meat has been getting a lot more expensive. Prices for meat, fish, poultry and eggs rose 3.7% in May from April, according to the Bureau of Labor Statistics. Beef and veal prices were up 11%, the largest ever monthly increase.
“We know that to be successful we have to win on taste, win on nutrition, and ultimately win on price,” he wrote. “If we can do those three things, we see tremendous opportunity to transition consumers from animal-based to plant-based meat.” 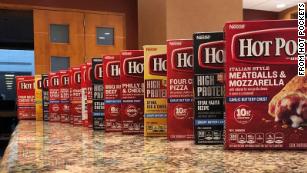 The pandemic is changing how much frozen food we buy
The cheaper plant-based products are still expected to be sold at a premium to animal beef — even though the traditional meat is pricier than this time last year.
Beef patties averaged $5.26 per pound as of June 12, according to the US Department of Agriculture. Those prices are up 5.26% from the week before and 17.7% from the comparable year-ago period.
The value-pack launch is one of several efforts to garner new customers. Beyond Meat plans to launch a direct-to-consumer website this summer and also is offering some of its current lineup at a discount.
The value pack concept could offer an attractive entry point for new and more price-sensitive customers, wrote Jon Andersen, a William Blair analyst, in a June 10 note.
Additionally, the move serves as an operational solution for lost sales at restaurants and other foodservice locations negatively affected by shutdowns, Andersen noted.