Here’s what the marine mammals were likely guarding. 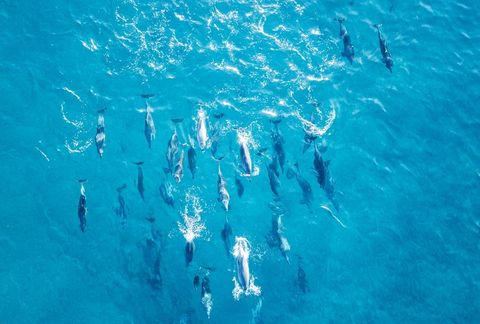 Satellite photos of a Russian naval base in Syria depict pens typically used to hold trained marine mammals. The pens, which made a brief appearance at the Tartus naval base from September to December 2018, likely contained military dolphins. Both the U.S. and Russia use trained dolphins to detect mines and enemy saboteurs—and Iran might, too.READ THISDoes Iran Have Secret Armed Dolphin Assassins?

The pens, according to naval analyst H.I. Sutton, appeared in the same part of Tartus reserved for Russian submarines visiting Syria. Russian subs have repeatedly launched cruise missile strikes against opponents of the Russian-backed Syrian regime. Sutton believes the pens likely held dolphins trained to defend ships against enemy saboteurs.This content is imported from Twitter. You may be able to find the same content in another format, or you may be able to find more information, at their web site.https://platform.twitter.com/embed/index.html?dnt=false&embedId=twitter-widget-0&frame=false&hideCard=false&hideThread=false&id=1284819163874119680&lang=en&origin=https%3A%2F%2Fwww.popularmechanics.com%2Fmilitary%2Fweapons%2Fa33369056%2Frussia-military-dolphins-syria-satellite-photos%2F&siteScreenName=PopMech&theme=light&widgetsVersion=9066bb2%3A1593540614199&width=550px

Russian military intervention in Syria is opposed by a number of sides in the conflict. Enemies of the Assad regime have launched several attacks against Moscow’s military forces, including a January 2018 mass drone strike against Tartus and Russia’s Hmeimim air base. Russia was likely concerned that enemy divers might attack warships in port and deployed dolphins as a response.

The pens only appear in imagery taken in the fall and winter of 2018. It’s not clear why the deployment was so short-lived, but Sutton speculates it may have been a test.