NAMPA, Idaho (CBS2) — A female duck from Lake Lowell is in recovery after she was found with a blow dart through her face on Jan. 24.

Lake Lowell Animal Rescue was called about a month ago about a report of a duck swimming around with a blow dart in its face.

After trying to catch the duck for weeks, the rescue was able to catch the female duck with the help of a BSU grad student’s net gun.

Matthew Gillikin, a BSU grad student, said he built the net gun for a senior capstone project. The goal of the project was to either do something to help the community or help solve a problem.

“Matthew has helped build us a net gun and we were able to take that out and use it to catch her,” Melissa Blackmer, Lake Lowell Animal Rescue Director said.

The duck was taken in and treated by Dr. Karlee Hondo-Rust, a veterinarian at Treasure Valley Veterinary Hospital.

“The dart actually entered just below her eye, so had it been a few millimeters back she would have lost her eye,” Dr. Hondo-Rust said. 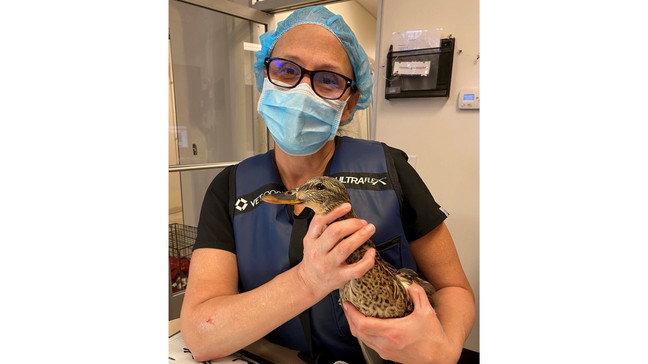 Dr. Hondo- Rust said the duck is doing well and responding to the pain medicine and antibiotics. She is hopeful that they can release her in a few weeks.

Blackmer said, unfortunately, this isn’t an isolated incident. Over the years, there have been reports around the valley about birds and cats being blow darted like this, but not all of them were as lucky as this duck.

“I do think there is someone or more than one person going around doing this and it’s incredibly unfortunate and very very cruel. It’s a recurring thing, so every few years or so we will get a run of ducks or geese come in because they have been blow darted and haven’t succumbed to their injuries,” Blackmer said.

“We just want to raise awareness about some of the animal cruelty that happens because I think a lot of times people don’t realize what can happen to your pet who is outside or in this case, ducks or roosters, or other animals,” Blackmer said.

You can also join the Facebook group The Life Outdoors for updates on animal cruelty cases in the area.https://imasdk.googleapis.com/js/core/bridge3.437.0_en.html#goog_270600489Volume 90% Lake Lowell female duck found with blow dart through her face{ }(Lake Lowell Animal Rescue)