Don’t panic; it won’t get that close. 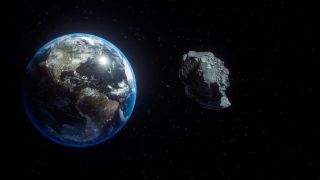 3D illustration of an asteroid flying past Earth.(Image: © Aleksandra Sova via Shutterstock)

An asteroid as wide as the Golden Gate Bridge is long will hurtle past Earth next month. But although it will be the biggest and speediest asteroid to fly by our planet this year, there’s no reason to panic.