Trapping legislation outdated, according to The Fur-BearersMar 18, 2021 3:43 PM By: Ben Bengtson 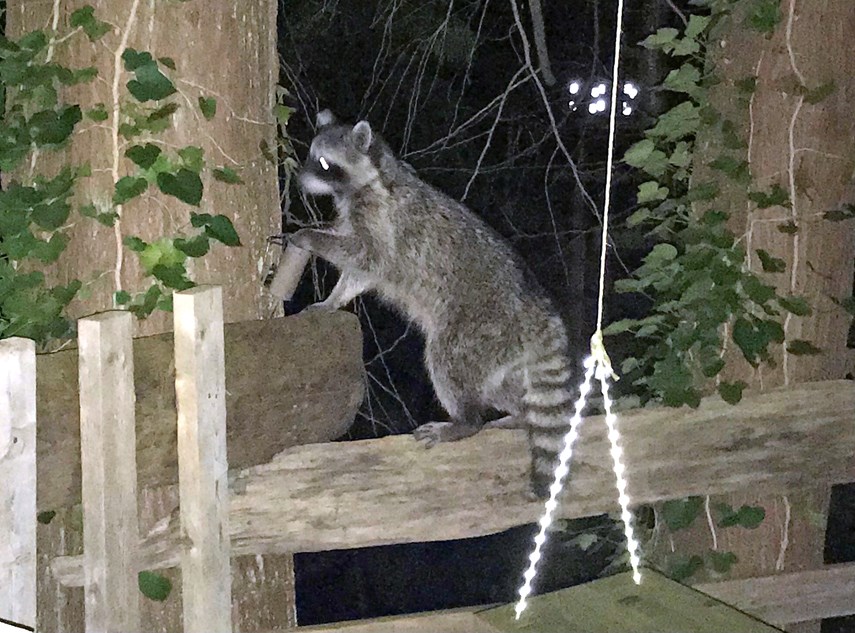 A raccoon was discovered with a trap around its front paw in West Vancouver on March 15.Wendy RobertsWildlife advocates are once again asking for B.C.’s trapping rules to be overhauled after a raccoon was caught in a trap earlier this week and was forced to crawl in pain for an unknown amount of time, eventually landing on a deck in West Vancouver.

Wendy Roberts, who lives with her family in West Van’s Bayridge neighbourhood, says she and her husband overheard an unusual rattling sound on their back deck at around 10 p.m. Monday. “It did sound odd,” she said.

They found the raccoon with its front paw ensnared in a cylindrical holding trap. The raccoon had apparently got caught in the trap and dragged itself onto their property, according to Roberts.

“There was a chain attached to the trap where you would secure it to the ground,” she noted.

Roberts called the B.C. Conservation Officer Service, which dispatched an officer from Squamish to West Vancouver at 10:30 p.m.

By the time the officer arrived, the raccoon had climbed onto a small treehouse in the family’s yard, and the chain had become stuck in the wooden structure, holding the animal in place.

The conservation officer was able to release the critter from the trap and determine that its injuries were non-life threatening before releasing it back into the wild. Roberts commended the COS for their late-night effort.

While it’s illegal to set a trap in B.C. within 200 metres of a dwelling, it is legal to trap and relocate a raccoon without a licence if it’s causing damage to a person’s private property, according to the COS.

In this instance, someone in the neighbourhood had likely set the holding trap because they were dealing with a nuisance raccoon, or raccoons, that were causing damage to their property, said COS spokesman Simon Gravel.

“The investigation did not allow us to know where this trap was coming from,” said Gravel.

While there are exceptions when it comes to trapping on private property, Gravel said it was important for people to education themselves about their options if they’re dealing with a raccoon problem.

“The technique of trapping chosen is very important,” said Gravel, who noted the style of holding trap that the raccoon in West Vancouver got caught in was likely one designed to hold an animal in place with the intent to destroy it – not a live trap method used to relocate and release the animal back into the wild. “That leads me to think that this is not the right tool in an urban setting.”

Gravel recommended always calling a professional when dealing with problem raccoons and visiting the WildSafeBC website for details on non-invasive and non-lethal removal methods.

Lesley Fox, executive director of The Fur-Bearers, a non-profit society dedicated to stopping trapping cruelty, praised the efforts of Roberts and the COS but said the incident reflected a larger issue concerning B.C.’s trapping regulations.

“We’re dealing with legislation that’s really old, and in the current legislation I think most British Columbians would be surprised to learn the majority of traps are still legal – leg-hold traps are still very much legal in the province of B.C. Trapping is not up North in the middle of nowhere. Traps can be set anywhere,” said Fox. “Traps continue to be a problem for all British Columbians and our wildlife trapping regulations need to be overhauled.”

Anyone with information related to cases of illegal trapping is asked to contact the COS Report All Poachers and Polluters line at 1-877-952-RAPP (7277).