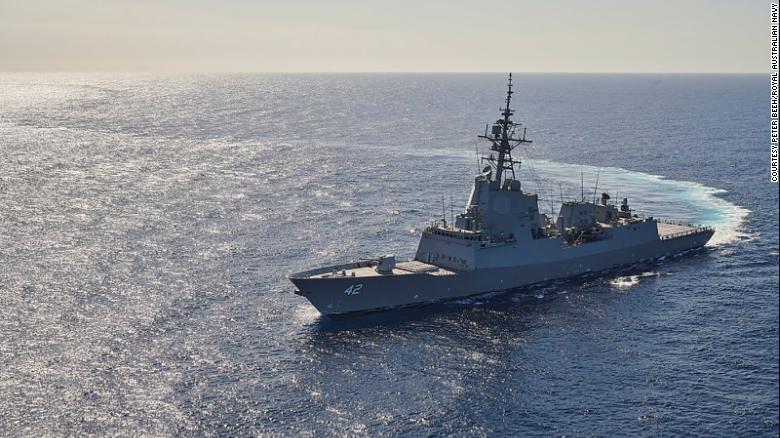 (CNN)Two dead endangered whales were dislodged from the hull of an Australian destroyer after the warship docked in San Diego last weekend, according to the Royal Australian Navy.The whales were found near HMAS Sydney, which berthed in Naval Base San Diego, the principal home port of the US Navy’s Pacific Fleet.”The Navy takes marine mammal safety seriously and is disheartened this incident occurred,” a statement from the Australian navy said.

The Australian and US navies — along with the US NOAA Fisheries, which oversees marine resources — were investigating, the statement said.

CNN affiliate 10News in San Diego reported the dead mammals were fin whales, the world’s second-largest whale species, behind only blue whales. One was 65 feet (about 20 meters) long and the other about 25 feet (7.6 meters), the report said.

A NOAA Fisheries fact sheet on fin whales lists them as endangered under the Endangered Species Act, with a population of about 3,200 off the US West Coast. The whales were once hunted extensively, but today their biggest threat is being struck by a ship, the fact sheet says.HMAS Sydney is a 481-foot (146.7-meter) guided-missile destroyer with a 7,000-ton displacement, according to the Australian navy. The ship’s hull extends 23.6 feet (7.2 meters) below the waterline.

It’s one of the newest ships in the Australian fleet, commissioned just a year ago.The ship steamed into San Diego on Saturday after testing its combat systems in an exercise off the California coast, according to a tweet from the Australian navy.Whale strikes by naval vessels are rare, said Carl Schuster, a former US Navy captain.”Whales can hear ships from miles away and generally avoid ships using mid-frequency and high-powered low frequency sonars because it bothers their hearing,” Schuster said.

Low-frequency sonar can confuse whales in shallower waters, Schuster said — but the Australian ship is equipped with a high-frequency sonar. However, a NOAA Fisheries report on whale strikes says they can occur as the whales feed and migrate in coastal waters, especially in heavy shipping lanes like those off Southern California.