Before Yom Kippur in 2018, an Orthodox Jewish man in Brooklyn recorded himself criticizing a ritual animal sacrifice called Kaporos while standing in front of hundreds of chickens who had been abandoned for the night with no food or water. While many Orthodox Jews are willing to speak off the record about their growing discomfort with Kaporos, few speak out publicly out of fear of retribution.

During Kaporos, practitioners swing six-week old chickens around their heads while reciting a prayer to symbolically transfer their sins to the animal before the Jewish Day of Atonement.  They then bring the chickens to ritual slaughterers who slice their throats in makeshift slaughterhouses erected for the holiday. 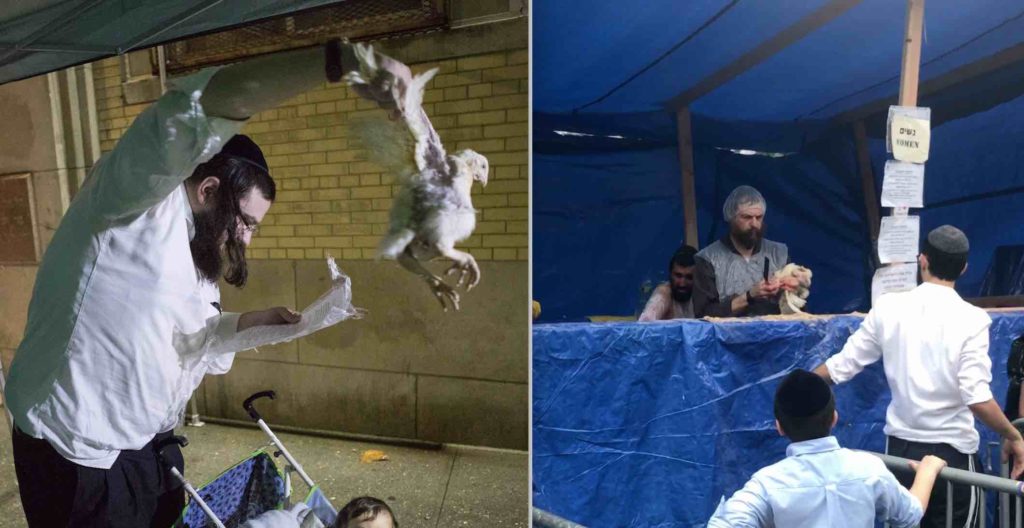 While reciting a prayer, a Kaporos practitioner swings a chicken around his son’s head in a symbolic transfer of his son’s sins to the chicken. The chicken is then killed in a makeshift slaughterhouse erected before Yom Kippur. (photos: Unparalleled Suffering Photography)

During a previous Kaporos, an Orthodox man in Brooklyn told TheirTurn that he felt that the ritual could not be conducted humanely on a mass scale in urban areas.  “It used to be, once upon a time, you lived in a little shtetl [small Jewish village in Eastern Europe]. You used to go before Yom Kippur. You used to take your chicken out of your backyard. You used to take it and do it, but not to bring as a mass slaughtering on the streets. And that’s why I think it’s not right.”

In recent years,  resistance to the use of live chickens has been building in Orthodox communities. In discussions with animal protection advocates, many Kaporos practitioners have acknowledged that the animals are mistreated in the days leading up to the ritual due to their intensive confinement in crates. While some say that the problems can be fixed, others in the community argue that the industrialization of the ritual has led to systemic abuses that violate “Tza’ar ba’alei chayim,” a Jewish commandment that bans causing animals unnecessary suffering. In 2017 and 2018, thousands of crated chickens died of hunger, thirst, sickness and heat exhaustion before the ritual even began.

Before Yom Kippur, tens of thousands of chickens are trucked into Brooklyn, and the chickens are held in crates for up to several days with no food, water or protection from weather extremes.

A least a dozen Orthodox Jews have told TheirTurn that online videos about the cruelty have compelled them and/or family members to stop using chickens. Others say that, because the ritual takes place just once a year, they begrudgingly continue to use chickens in order to avoid family or community strife. 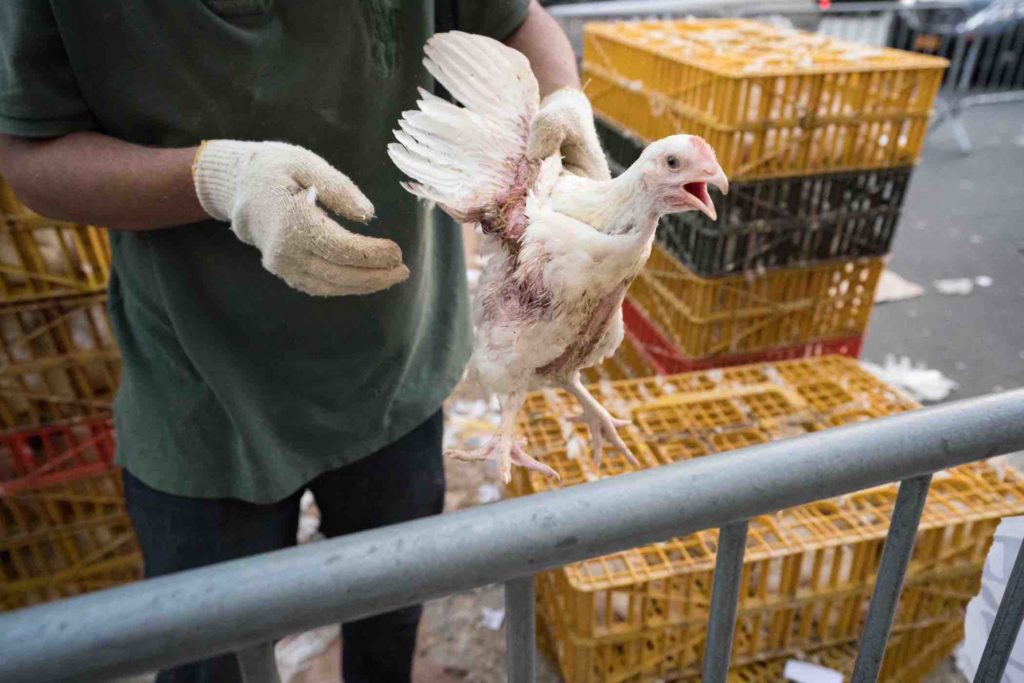 Advocates say that holding chickens by their wings instead of their bodies causes them more pain as they’re pulled from the crates, transferred to the Kaporos practitioner and swung in the air.

In New York City, animal rights activists have been protesting the ritual for decades, but they have seen few tangible results. “In candid discussions with Orthodox Jews, we have learned that the community doubles down on something when outsiders ask them to stop,” said Jessica Hollander, an activist who has been protesting the ritual since 2014. “We were trying to help the chickens, but, in the end, we were doing more harm than good.”  In 2018, the activist community stopped protesting and instead focused on providing food and water to the beleaguered chickens.

Advocates provide water to chickens in crates who are intensively confined for up to several days with no food, water or protection from the extreme heat.

To the surprise of animal rights activists in the United States, Israel’s Ministry of Agriculture released an animated public service announcement encouraging Kaporos practitioners to use coins instead of live animals. In New York City, the government not only refuses to speak out against the use of chickens, but also provides City resources for ritual, in spite of the 15 city and state public health and animal cruelty laws that are violated.