JANESVILLE–A local hunter-safety instructor thinks some 9-year-olds are ready to handle a rifle and hunt game.

But Craig Strouse is not on board for a bill in the state Legislature that would remove all age restrictions.

The state Assembly passed a bill Thursday that would let a child of any age hunt with close supervision. The bill now goes to the Senate.

Now, no one younger than 10 years of age may acquire a hunting license in Wisconsin.

The state’s minimum hunting age used to be 12, but in 2009, the Legislature created mentored hunting, in which hunters ages 10 and 11 could hunt with a licensed hunter, who must be within arm’s reach.

“Do you want the government telling you what you can or cannot do?” he said.

Strouse, who is a captain and assistant administrator at the Rock County Jail, has been teaching hunter safety for years.

The ideal would be wise parents deciding when their children are ready to hunt, but not all parents are wise, he said.

Some adults can’t even drive responsibly, he noted.

“I guess I don’t have the legislative answer to the question. I do know I’ve been at and heard about some terrible hunting accidents, and they always violate one or two of the rules of hunter safety,” Strouse said.

— Treat every firearm as if it’s loaded.

— Always point the muzzle in a safe direction.

— Be certain of the target and what lies beyond.

— Keep your finger outside the trigger guard until you’re ready to shoot.

But it goes deeper than that, Strouse said. For example, a hunter has to appreciate what the firearm is capable of doing. A deer rifle can shoot a bullet three to four miles, a .22-caliber rifle can send a bullet about a mile, and a slug from a shotgun can go 300 to 600 yards.

Hunting deaths have dropped greatly since that law was enacted in the 1980s, he said.

Even older hunters could benefit from the course, said Strouse, who suggests parents take the course with their children.

Strouse said hunting is a great way for a parents to spend long stretches of quality time with their children.

Strouse said for him, having children along enhances the hunt.

He doesn’t get excited about harvesting a deer anymore, unless it’s a big one. But when hunting with children brings back the joys of his youth: “It’s exciting again.” 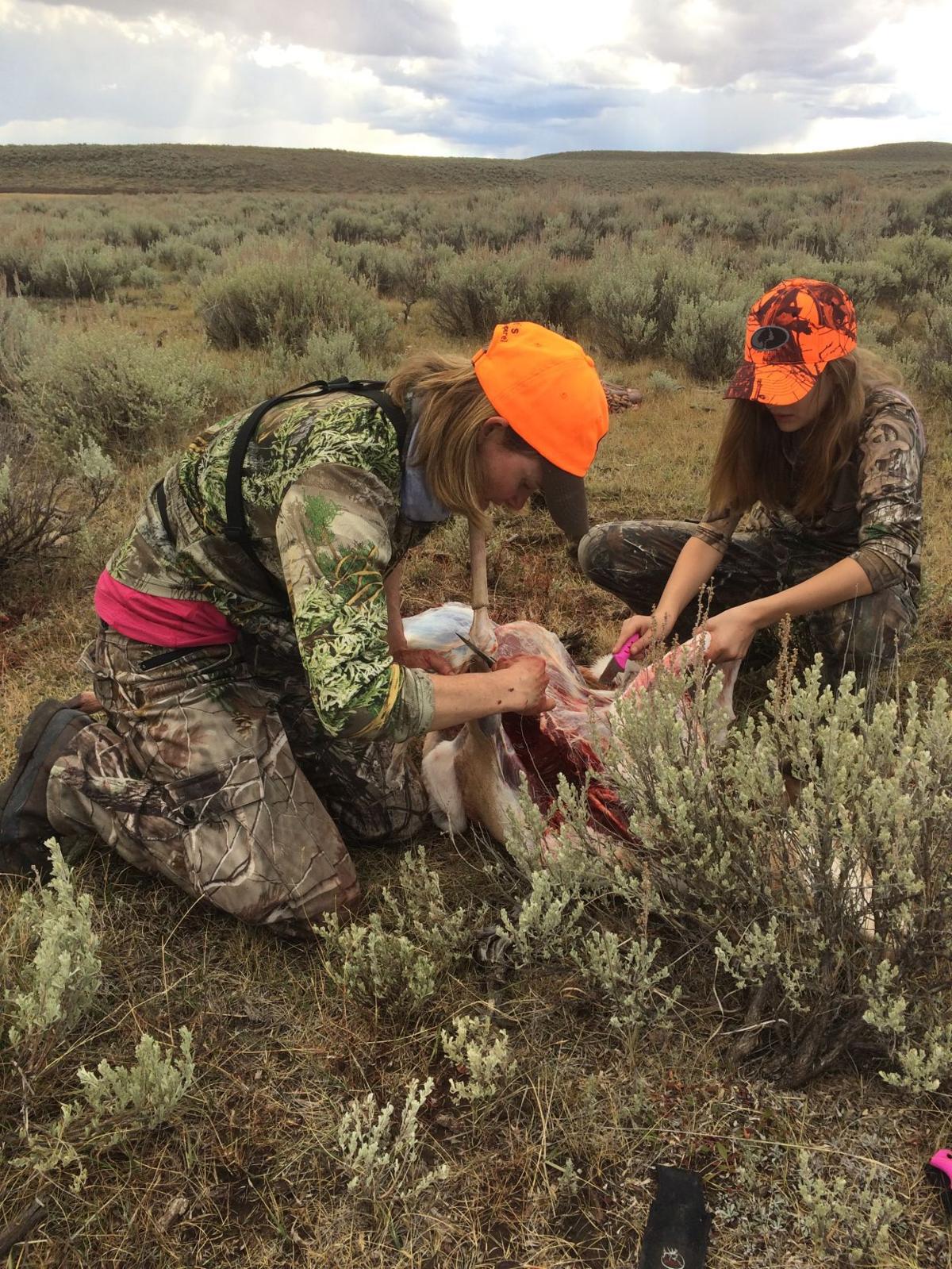 She rested in the grass next to her mom as they watched a a doe and a buck. And in one shot, Lily killed the doe.

“I felt really proud of myself. I didn’t know I could do that since it was my first one,” Lily said recently. “It is fun when you get an animal to know you’re feeding your family, and you know the animal died in a humane way.”

Now 14, Lily plans to chase a bull elk this year outside Jackson.

In a sport historically dominated by men, who pass their skills along to sons, stories like Lily’s are becoming ever more common.

“Wyoming is one of the states where we’re not losing resident hunters,” said Kathryn Boswell, hunter and angler participation coordinator for the department. “Our numbers are going up, and it’s because women are increasing, and they’re making up the difference.”

Boswell, who is also a founding member of the Wyoming Women’s Antelope Hunt, doesn’t have hard data explaining the increase in women hunters. But she has a few theories from what she’s heard from other women.

“It’s something they can do with their families. They want to put organic meat on the table,” she said. “And there’s a camaraderie that comes with it.”

University of Wyoming student Lexi Daugherty agrees. She’s been hunting with her father most of her life and shot a pronghorn in 2015 at the Women’s Antelope Hunt.

The 18-year-old believes improving access to hunting will also help create more conservationists. She spent the last two years working with the Rocky Mountain Elk Foundation and Game and Fish to secure a 20-acre piece of ground near Jackson that opens access to almost 17,000 acres of public land.

“Now it will be there forever, for young girls like me to go hunting on it,” she said. “And it’s something that’s really special to me.”

Hunting also teaches her skills to stay safe in the woods and find food for herself.

Casper teen Krysten Cutler started hunting and fishing with her grandfather, Dale Leatham, who has taken her across Wyoming and the world to chase wildlife.

The two went on a safari to Africa in June with other family members. The 12-year-old shot four African animals including a zebra and impala.

For Krysten, hunting means more time with her grandpa.

“He teaches me, and I like doing it because it’s something to get us outdoors,” she said. “It bonds our relationship.”

The meat from her African animals went to local villagers, though she was able to try each species. A deer she shot recently is at the processor.

“People say that men usually only hunt, but clearly that’s not true,” she said. “I was 12 when I shot my first antelope and I know a lot of other girls who shot their first antelope when they were 12, and it should start evolving.”

Lily, the hunter from Jackson, isn’t sure after this year how much more she’ll hunt. She doesn’t have the same passion for the sport as her mom does. But she also believes in it as a way for women to stay self-sufficient.

Her mom, Gloria Courser, knows that whatever path her daughter chooses, she will be able to take care of herself in the woods.

When Courser started dating her husband in 2006, she didn’t have those skills.

“We were on a game trail and about 20 minutes in he looked back at me and said ‘Where’s the truck?’” she said. “I looked like the scarecrow on the Wizard of Oz. It was a truly teachable moment. I was out of my element.”

The next time they went, she knew where the truck was. And this fall, she was a guide for the Women’s Antelope Hunt.

Not every woman will have a passion for hunting, she said.

“It’s like when I moved away from home, I learned to change my oil. I did it one time, and decided I wouldn’t do it ever again if I didn’t have to,” she said. “But trying, learning to do it, learning how to use a firearm, understanding where meat comes from, is important.”

A PETITION TO TEACH CHILDREN RIGHT—HAVING A CHILD READ ABOUT “BAMBI”, and then teaching them to kill animals, or partake in what others kill, is a destructive to their psyches and their bodies….please, sign and share below, to say we must teach ANIMAL RIGHTS IN SCHOOLS…this is the only way, to ensure a kinder and GENTLER WORLD….thanks, Animal Freedom Fighters…

Never underestimate the power of brainwashing when it comes to transforming peaceable children into violent hunters of helpless beings. If we are to assume that most children are born innocent, with a natural affinity toward animals, then brainwashing is the only explanation for their conversion to hunting. Of course, peer pressure and the mind-numbing power of constant bombardment of violent movies, TV and video games are clearly culprits in a kid’s overall corruption; but those are all just contributors to the overall brainwashing process.

There are four basic elements involved when a person is brainwashed:

Applying this formula to the average animal-loving young child, in order for them to be brainwashed into thinking hunting is a normal, acceptable activity, they first need to suffer a traumatic shock. Well, surely seeing their first living, breathing deer, elk, goose or rabbit shot down (whether by gun or bow and arrow), then bled-out and butchered right before their eyes would qualify.

The isolation they would feel would be both physical and emotional, with no one out there to relate to or share in their sorrow for the poor animal so unnecessarily murdered by someone they’ve always looked up to.

The programming would have gone on well before the child witnessed the carnage. After the kill, it would become even more intense as the father (or mother) figure struggles to make their murderous act seem justified.

And the reward comes in the form of enthusiastic praise and back-patting when the child makes their first solo kill.

Before you know it, the once caring young person is fully indoctrinated into the sportsmen’s way of looking at animals—as objects to be “harvested” or “culled,” depending on its species or the whim of its assassin.

The hunting industry’s motto must be: “Get ‘em while they’re young.”

Being the diehard “sportsman” that he is, Republican vice presidential candidate Paul Ryan is taking that maxim to heart. Yesterday he told ABC News his daughter has watched him hunt for years, and he’d already bought her a Remington 700 .243 junior model rifle last Christmas.

“She’s going to get to go hunting this year for the first time,” Ryan said. “She’s 10 years old, so she can hunt starting at 10. I just need to get her some clothes.”

What kind of clothes? Why camo, of course. No doubt sensing a photo op, Ryan stopped at the Forest Park, Ohio, Outdoor World and paid $101.14 in cash for camouflage gloves and a jacket.

Females are supposed to be the more caring and nurturing of our species. How is teaching them to murder animals at an early age a good thing? Unless we want a world full of conscienceless, compassionless killers, it isn’t.

A normal young girl’s natural reaction to seeing a beautiful creature killed is shock, sadness, revulsion or repugnance. But if her father praises her enough when she brings down her first victim, there’s a chance she’ll end up thinking that she somehow enjoys it. From then on, when she sees a deer or rabbit, she will think of the praise she received; she’ll see them simply as trophies to mount on the wall; or she’ll envision them butchered and reduced to bloody lumps of meat. She’ll always be a little twisted in her perception of our fellow beings.

Years later, after a string of failed marriages, alcoholism, suicide attempts or a criminal record for child abuse or other violent crimes, in addition to a lifetime of inner turmoil, she might eventually seek psychiatric counseling. Only then will she realize that her problems began on the day her father first praised her for killing an innocent, sentient animal—the kind that she used to think of as beautiful.

And this Ryan guy wants to be our vice president? Considering the way he plans to corrupt his little girl, I’d want him to stay the hell away from my daughter.