Skip to primary content
Skip to secondary content
An Olympic gold medalist, an influential lobbyist and a former beauty queen convicted of illegally killing a bear have joined forces for Donald Trump, joining his son’s “coalition” for gun rights and the second amendment.

At the helm of the “second amendment coalition” are Donald Trump Jr, Trump’s eldest son, and Chris Cox, the head of the National Rifle Association’s lobbying arm, the NRA Institute for Legislative Action. 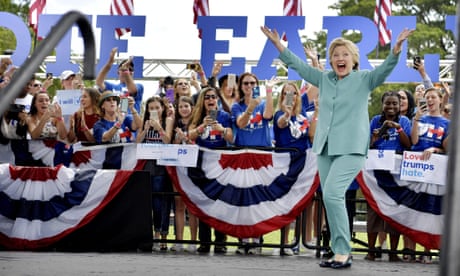 “My father defends the second amendment, so that you and I and your spouse and your children can take care of themselves when someone much stronger, much meaner and much more vicious than them tries to break into their home,” Trump Jr said in the press release announcing the group.

“It’s not just a hobby or something I do on the weekends. It’s a lifestyle; and as my father often says: ‘This is about self-defense, plain and simple.’”

Both Trump’s sons are avid hunters, and their enthusiasm for weapons has been well documented since photographs surfaced of the brothers posing with dead animals after a big game hunt in Zimbabwe – a hunt that provoked criticism at home and abroad. Since the campaign began, Trump Jr has served as a liaison between the campaign and the gun industry.

How long will it be before someone gets shot by a Donald Trump supporter in what the shooter may likely consider an act of patriotic civil disobedience? Or before someone uses a gun against right-wing vigilantes?

There is no shortage of evidence pointing toward some violent outburst surrounding the presidential election results. Reporters interviewing Trump supporters at rallies, national polls showing likely voters are expecting Election Day violence, consumer-trend tracking firms saying demand is rising for gun purchases, and rhetoric from the longstanding cadre of right-wing loudmouths, all suggest some type of ugly response.

“Sixteen percent of Americans plan on buying a gun as a result of the upcoming election,” said a press release Thursday from Elementum, “the real-time supply chain platform company, who polled 2,000 Americans from October 20-24 and found that among those living in the South, 19 percent will buy guns and among Gen Xers, the number is nearly 23 percent, especially among women, 24 percent.”

Wrapping oneself in the flag and taking up arms is a staple of the far-right militia-embracing fringe. But the urge has found a new home in the Trump campaign, led by a presidential candidate who says the vote will be stolen unless he wins, a manager who publishes bomb-throwing Breitbart News, and backers who get their “news” from even more extreme sources like conspiracist Alex Jones ofInfoWars.

When CNN’s Jake Tapper tweeted back, “#WalshFreedom what exactly does that mean?” the self-styled revolutionary replied, “Protesting… Acts of civil disobedience. Doing what it takes to get our country back.”

Walsh, when pressed by other news outlets, ever so slickly declared he was referring to a firearm used in colonial times, meaning it was symbolic posturing. An ex-congressman should know better—and he is playing with fire.

But other Trump true believers do not know better.

“People are going to march on the capitols,” Jared Halbrook, 25, of Green Bay, Wisconsin, told the New York Times in a piece posted Thursday based on interviewing 50 supporters in swing states. “They’re going to do whatever needs to be done to get her out of office, because she does not belong there… [Clinton] has to go by any means necessary, it will be done.”

There is mounting evidence that the Trump-led faction of the Republican Party is preparing to take their rage into the streets. Half of likely voters expect Election Day will be violent, a USA Today/Suffolk University poll released Wednesdayfound.

“Hillary Clinton has built a formidable lead over Donald Trump approaching 10 percentage points,” the national newspaper reported. “But she faces a deeply divided nation that is alarmed about the prospect of Election Day violence and what may be ahead. A 51 percent majority of likely voters express at least some concern about the possibility of violence on Election Day; one in five are ‘very concerned.’”

Digging deeper, USAToday echoed what Trump supporters at rallies were saying, according to the Times.

“More than four in 10 of Trump supporters say they won’t recognize the legitimacy of Clinton as president, if she prevails, because they say she wouldn’t have won fair and square,” USAToday said. This confirms the far right is taking Trump’s repeated claims that the election will be rigged as their new political gospel, even though a majority of top state election officials—who are Republicans—have said that’s not true.

There have been almost no post-debate polls by credible pollsters (not counting instant Internet surveys on right-wing websites like the Drudge Report) showing Trump with a path to the 270 Electoral College votes to win the presidency. But facts have never mattered to the Trump campaign and his flock. He has said they need to patrol the polls on Election Day, raising the specter of right-wing vigilantes intimidating voters in non-white population centers, an image last widely seen in the pre-Civil Rights Movement south.

Clinton, in her latest speeches, has said Trump’s talk of rigged elections and his threat not to accept certified vote counts is targeting American democracy itself.

“Donald Trump is attacking everything that has set our country apart for 240 years,” she said Tuesday in Florida. “After spending his entire campaign attacking one group of Americans after another … now his final target is democracy itself.”

And in addition to democracy, the target includes all Americans who reject Trump and the far right’s machinations.

Steven Rosenfeld covers national political issues for AlterNet, including America’s retirement crisis, democracy and voting rights, and campaigns and elections. He is the author of “Count My Vote: A Citizen’s Guide to Voting” (AlterNet Books, 2008).

Despite their sharp contrast on climate change, the subject has not been a major topic of discussion in the 2016 presidential election between Hillary Clinton and Donald Trump.

In the first debate between Clinton and Trump on Sept. 26., only one minute and 22 seconds was spent on climate change and other environmental issues.

In comparison with presidential debates since 2000, this is the second least amount of time spent on environmental policy. Although it has been a hot-button issue, it was not discussed at all in the 2012 presidential election between President Barack Obama and Mitt Romney.

The high point for green issues came during the 2000 presidential debates between Al Gore and George W. Bush.

This data is provided by grist.com.

While Clinton believes that it is an urgent issue, Trump has called climate change a “hoax” in the past.

In the first debate, Clinton accused Trump of believing that climate change is “a hoax perpetrated by the Chinese.”

Trump interjected and said that was false. However, as social media users quickly discovered, he had said exactly that in a 2012 tweet.

In a previous AccuWeather poll from February 2016, 58 percent of voters said that a candidate’s stance on climate change would not influence their vote in the election.

Though Trump’s rejection of climate science will not influence everyone’s vote, it may help Clinton reach millennial voters. According to a Harvard study, three out of four millennials believe in climate change.

“… Never thought when I gave my acceptance speech at the Democratic National Convention that I would have to put in the following sentence: I believe in science,” Clinton said to the University of New Hampshire campus on Sept. 28.

Young voters have consistently ranked climate change as an important issue, and Clinton’s position is a major divide with both Trump and Gary Johnson, the libertarian candidate.

Clinton’s environmental allies are urging her campaign and debate moderators to keep climate change in the spotlight as the political campaign continues.

It’s Election Day and you’re probably on pins and needles waiting to find out which lucky candidate will be the next President of the United States. But I want to talk about something more important.

I don’t have anything in particular in mind. It could be the weather (or more specifically, how the weather is changing because of global warming). Or, it could be the rhino poaching problem in Africa, the dolphin slaughter going on right now in Japan or the perilously low numbers of big cats left on the planet. Or how, for some people, attitudes towards wolves haven’t changed since the barbarically backwards days of dark ages past.

The point is, no matter how this hyped-up human election turns out, there are other important issues going on at the same time that aren’t getting the media attention they deserve.

He waits in silence—his scent masked, face painted, dressed in camouflage head to toe—alert for any sign of the enemy. Keyed up for the kill, he texts quietly to pass the time—eager to learn how much his investments have grown in the past hour.

Suddenly the enemy steps out from behind heavy cover and into range. The assassin tenses, every muscle in his body taut and ready for battle. He’s hoping to make a “clean” kill. Somewhere in the back of his mind is the vague, indistinct notion that a sloppy shot might cause his quarry to suffer; but of far greater import to him are the bragging rights among his comrades if his shot hits the mark, and the fact that an injured enemy could get away.

As his intended victim moves in closer, unaware of his presence (perched in a tree stand just overhead), the killer draws back the string of his compound bow and lets fly an aluminum arrow with a razor-sharp steel point (available tax-free in any sporting goods shop in his state, thanks to him). The arrow hits the target broadside, but as luck would have it the

shot misses the heart, and sure enough the wounded enemy escapes…

But fear not, the “enemy” isn’t a dangerous terrorist out to destroy the American way of life. He’s a gentle, doe-eyed deer, peacefully minding his own business.  And the killer is not Rambo or some other heroic mercenary type, here to rid the world of bad guys. It’s just Paul Ryan, who, despite his cruel streak and his habit of bullying defenseless deer and wild turkeys, could wake up a week from now and find himself second in charge—only a heartbeat away from Commander in Chief—of the nation with the most destructive weapons on Earth.

The world waits with bated breath…