A vaquita marina trapped in a gillnet. ©OMAR VIDAL

Reduced numbers of remaining vaquitas is justification for the change, says environment ministry

The federal government said Saturday it is considering reducing the area in the upper Gulf of California where the critically endangered vaquita marina porpoise is protected.

The measure would reduce the area where there is a ban on the use of gillnets, in which the world’s smallest porpoises are prone to becoming entangled and dying.

The Environment Ministry (Semarnat) said that a decrease in the number of vaquitas and the area where they have been seen in recent years provides justification for reducing the size of the protected area.

The area extends from the Colorado River delta in the north of the Gulf past the fishing town of San Felipe on the west coast and near Puerto Peñasco on the east coast.

“The possibility of modifying the area of gillnet bans is being studied,” Semarnat said in a statement.

“There have been enough technical studies to indicate a possible reduction in the zone, according to the recent distribution of the vaquita marina in the area.”

The ministry said the possibility would be discussed by a group that includes fishermen, academics, members of the general public and government officials. A first report on the outcome of the discussions will be presented on March 26, Semarnat said.https://3b42f534fba175c67eb853d733e1aa50.safeframe.googlesyndication.com/safeframe/1-0-37/html/container.html

Many fishermen have vehemently opposed the gillnet ban because they use the nets to catch totoaba, another endangered species whose swim bladders are considered a delicacy in China and yield thousands of dollars per kilogram. Mexican drug cartels are said to be involved in the illegal fishing and trafficking of totoaba, a large member of the sciaenidae, or drum, family of fish.

Fishermen have staged protests against the gillnet ban and attacked vessels operated by Sea Shepherd, a marine conservation group that removes nets in the protected area. Fishermen have also clashed with the navy, which carries out patrols against illegal fishing in the Gulf of California.

Alex Olivera, Mexico representative for the Center for Biological Diversity, said that reducing the size of the protected area would inevitably increase the likelihood of the small remaining population of vaquitas encountering a gillnet.

“Reducing the zone … means cutting the area available to the vaquita marina, and of course this species doesn’t live in a pen, it lives in the marine environment, so as soon as it leaves the zone, it could face gillnets, which are a threat,” he said.

The Sea Shepherd vessel Sharpie. SEA SHEPHERD CONSERVATION SOCIETY
The vessel was on a mission to protect the endangered vaquita marina porpoise

Four fishing skiffs known as pangas approached the M/V Sharpie and began to chase it at full speed just after 10:00 a.m., Sea Shepherd said in a statement.

At least two shots fired from the pangas landed in the water near the Sea Shepherd vessel but it was not hit. There were no injuries among the conservationists on board nor the officials from the navy, Federal Police and Environmental Protection Agency (Profepa) who accompanied them.

The incident occurred in an area of the upper Gulf of California known as a “critical zone” because several vaquitas have been sighted there.

In response to the attack, the captain of the Sharpie carried out anti-piracy procedures, which included the use of water cannons.

“It proves to us that they are armed and that we need to take every panga that we come across seriously, because we have no idea what they are capable of,” she said.

The vaquita marina population has been decimated by the illegal use of gillnets to catch totoaba, whose swim bladders are considered a delicacy in China and sell for thousands of dollars. The mammals often become entangled in the nets and drown.

Experts estimate that there are only between six and 19 vaquitas left in the Gulf of California, the only place in the world they live.

The attack on Saturday occurred in the same area where Sea Shepherd found a dead vaquita trapped in a net last March. Profepa said that the vaquita was in a state of advanced decomposition but had stab wounds consistent with the cutting of the net in which the animal was entangled.

Sea Shepherd has been collaborating with Mexican authorities for six years to remove gillnets from the Gulf of California.

Desperate to protect the fat profits they make from selling totoaba on the black market, poachers have resorted to violence in the past.

The Sea Shepherd vessel M/V Farley Mowat was attacked last January by crew members on more than 50 skiffs, who threw rocks and molotov cocktails at the ship, breaking its windows and causing its hull to catch fire.

The same vessel was ambushed and boarded by poachers earlier the same month, the United States-based marine conservation organization said.

Scientists said in October that they saw over 70 fishing boats in the 150-square-kilometer zero-tolerance zone on a single day that month. They also photographed a vaquita swimming alongside one of the vessels working in the area where the use of gillnets is prohibited.
https://mexiconewsdaily.com/news/conservationists-shot-at-by-poachers-during-gulf-of-california-patrol/?fbclid=IwAR1N9OWCGX791VNsYSSEHEBMwrwenfvBQO68mUMm-UQzTWyZiq7dB4dhL5w

First the good news: the emaciated sea lion I reported on in my last post is no longer on the beach, suffering and lying helplessly in fear of getting run over.

At least as of yesterday.

Although no one actually saw her make it to the water and swim off, the

official theory is that she somehow suddenly snapped out of it and had a miraculous recovery. The main problem with that happy ending explanation is that she had lost so much strength and body fat that she’d have an extremely hard time battling the waves and avoiding the threat of hypothermia in the cold North Pacific waters. (One of the reasons weakened seals and sea lions sometimes haul out on the sand is for the warmth it provides.)

But I can imagine her using her last bit of energy to get back to her ocean home, thinking she would rather die in familiar aquatic surroundings than out on an exposed (which doubles as a highway), vulnerable to dogs, birds and any other scavenger that came along. Her body had lost buoyancy, being devoid of every last ounce of blubber, so, unfortunately, it seems probable she would drown and sink to the bottom when she had no more stamina to stay afloat.

But at least she’s not still out there unprotected—a living obstacle for every passing monster truck or SUV.

Instead of finding her there, as was the expectation when we headed to the beach yesterday, we found the place virtually strewn with the bodies of other dead marine mammals in various stages of decay. Among the fallen were four other California sea lions—one of whom was a very young pup—and a harbor seal. Additionally, there were two dead porpoises who likely drowned in fishing nets. The seal and the three adult sea lions were all probably shooting victims; the newborn may have followed her dying mother and either starved from lack of milk or died of hypothermia.

All in all, a high price to pay for that seafood dinner.

It always amazes me how fishermen out there (so utterly dependent on burning diesel fuel just to stay afloat) feel such a sense of entitlement to the fish in the ocean that they take sport in playing “cowboy,” shooting at highly evolved and incredibly adapted marine mammals whose historic claim to pelagic resources supersedes theirs by millions of years. 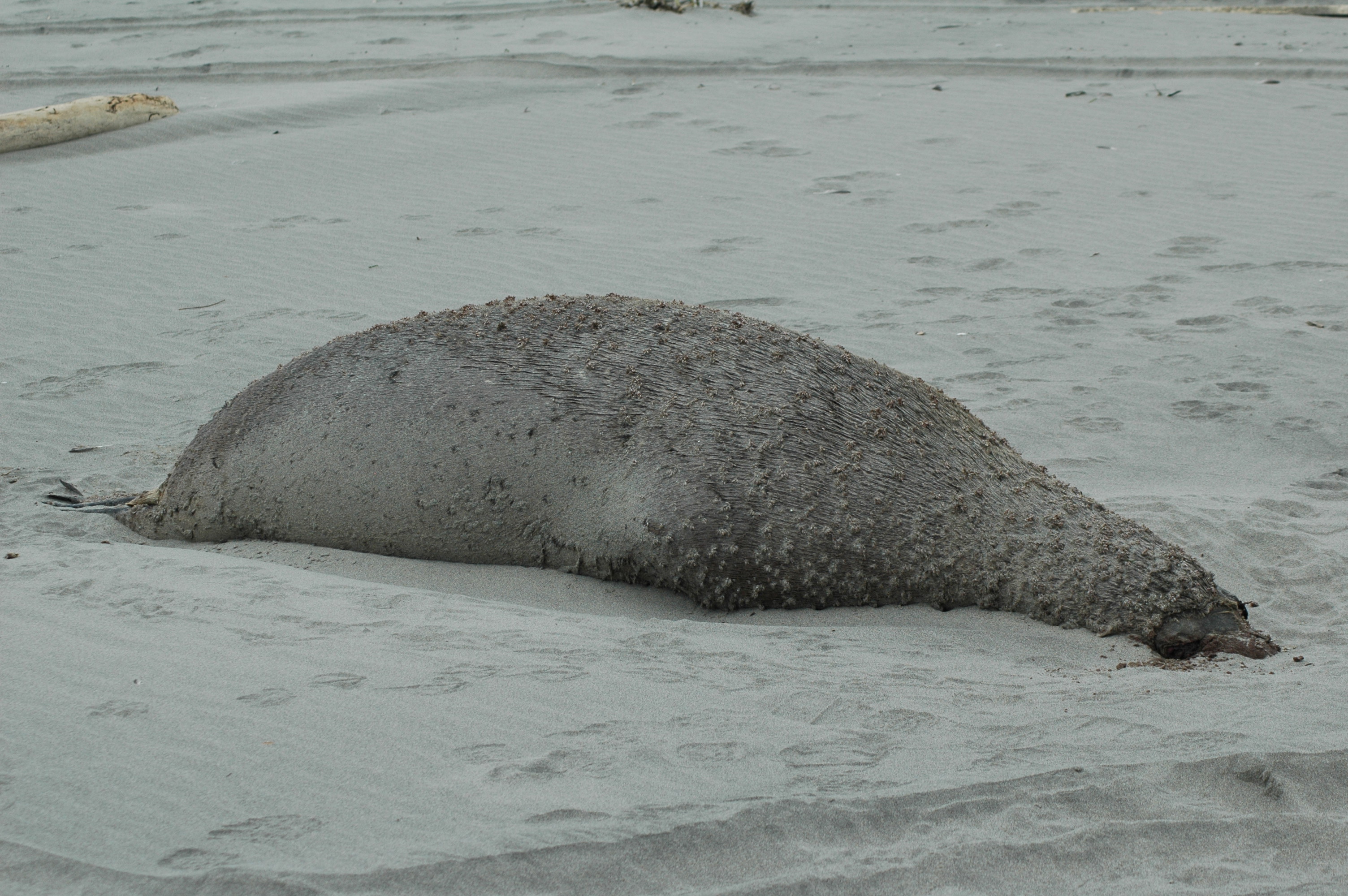