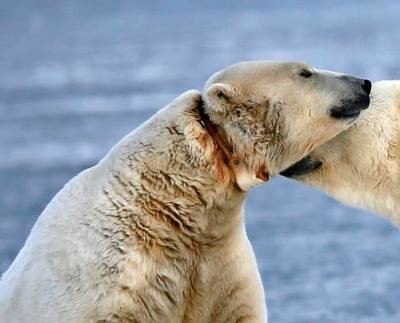 A polar bear named Andy is in trouble, and he needs our help. When he was not yet full-grown, Andy was fitted with a tracking collar by researchers. As he has grown, the collar has malfunctioned — it stopped transmitting a signal, and, last month, a photographer captured a photo of Andy with evident trauma around his neck from the extremely tight collar with a  release mechanism that has clearly failed. Andy’s life is at risk.

US and Canadian authorities were alerted to Andy’s situation, but so far no one is taking action or claiming responsibility for the collaring. Evidence suggests that it was likely the University of Alberta that placed the collar on Andy, yet all they have said in response to recent public pressure to help him is “options to find the bear are being examined.”

Time is running out, and we need to take real action. We are calling on the University of Alberta to immediately institute an active search for Andy, so they can remove the collar and provide all necessary treatment to ensure his well-being.

Locals in the area of Alaska where Andy was last seen have complained about polar bears with too-tight collars for years. Complications from collaring occur far too often, as the collaring process involves stressful chases, harmful sedation, and sometimes causes death. Collaring of polar bears is invasive and dangerous and there are simply far too few of this majestic species left to play with their lives.

It is true that Andy is just one polar bear, and scientists may see his plight as “collateral damage” in the interest of research for the good of all polar bears. But there is no justification for his strangulation, and research institutes that endeavor to capture and collar threatened species must be held responsible for their health and well-being.

In the meantime, the University of Alberta must use their resources to track Andy, remove the collar, and get him the medical attention he needs. Adding your voice to this petition will let them know that we are holding them accountable for Andy’s well-being, and that we will accept nothing short of immediate action.

6 thoughts on “Save Andy the Polar Bear”